Pomerleau delivers Place Bell ahead of schedule and under budget 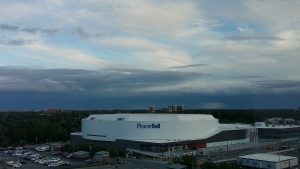 Pomerleau was present at the official opening of its Place Bell project in Laval, Quebec last week. The multipurpose complex was completed ahead of the projected three-year timeline and came in under the original $200-million budget. Some of the features include an Olympic ice rink with 2,500 seats, a community rink for 500 spectators, and an amphitheatre with an NHL-sized rink that can seat 10,000 guests and easily be converted into a theatre or concert venue.

The September 1st inauguration ceremony was attended by Marc Demers, Mayor of Laval, who was joined by the Chairman of the Board of Directors of the City of Culture and Sport of Laval Marcel Alexander; President and Chief Canadian Hockey Club Geoff Molson; Bell Vice-President, Industry Relations Pierre Rodrigue; and the Minister Responsible for Seniors and the Fight Against Bullying and Minister Responsible for Region of Laval Francine Charbonneau. Also, Donald Audette, former professional hockey player, and Jacob Chicoine, a young player on the hockey team Les Patriotes de Laval, were present to underscore the importance of this new complex for the athletes of tomorrow.

New home to the Laval Rockets, the top minor league affiliate of the NHL’s Montreal Canadiens and future venue of many musical performances, Place Bell will become a unique location for combining Laval’s sports and cultural development.

Mayor Demers noted, “The success of Place Bell is the result of the combination of creativity, talent, competence and the sustained efforts of all. I would like to thank everyone who made monumental efforts to complete the construction of this unique and international building.”

Pomerleau’s expert use of Building Information Modeling from start to finish and a successful collaborative process with stakeholders ensured Place Bell was delivered under budget and ahead of Schedule.