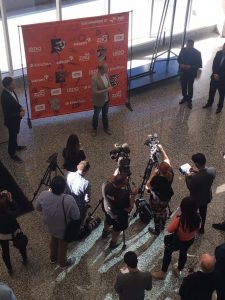 “I completely believe that there is one idea out there, in Edmonton, probably sitting in the head of a stranger to me and a stranger to you, that can bring us together in a way we’ve never experienced and contribute to our story in a way today we don’t understand, but also place something of permanence in our built environment,” said Jeffrey Hansen-Carlson, business development director, EllisDon.

On August 25, the Edmonton Project was launched with support from industry leaders including co-founder Jeffrey Hansen-Carlson, EllisDon, alongside Edmonton Mayor Don Iveson. Backed by five companies – EllisDon, ATB, BDO, Kasian, and Zag Creative – The Edmonton Project is a community-led initiative that aims to create a permanent place of attraction that is representative of the city’s story and pride.

Edmonton residents now have the opportunity to give their input and share their ideas on what attraction they think will best define the city. The goal is to create something new and exciting that extends beyond traditional monuments and statues.

The deadline to submit ideas is October 20, 2017. Submissions will be reviewed and shortlisted by a panel. Then in mid-January, the top 10 submissions will go through a Design Den event before the top idea is selected.

For more information, or to submit your idea, please visit: http://theedmontonproject.ca/