Report suggests there is uncertainty in the construction market. 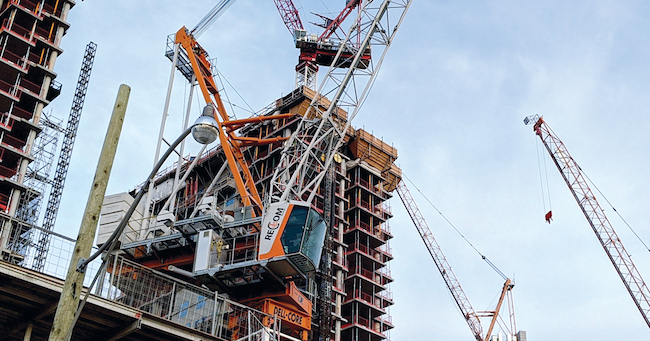 The Rider Levett Bucknall Crane Index for North America has reported a 4.5 decrease in crane count in Q3 2021 compared to Q1.

Of the 14 cities that are surveyed for the report, just three saw a boost in their numbers, while five others saw a significant decrease (greater than 30 per cent). Toronto, which has scored very well in recent reports, was among the cities going up, experiencing an 8 per cent increase over Q1. Year over year increases for Canada’s largest city were 81 per cent, driven mostly by residential and mixed-use projects.

Since Q1, no city has seen a bigger increase than Los Angeles, with a 19 per cent hike since the last report.

In its continent-wide summary, the report suggested that: “The single thread that can be woven amongst all cities surveyed is uncertainty; it remains a significant factor to the construction market. We see this in cities where crane counts are holding steady, if not decreasing, in their markets. We anticipate better times ahead with previously delayed projects being brought back online; however, this is conditional upon market conditions as the AEC industry continues to experience the effects of COVID-19.”

The only other Canadian city that is monitored is Calgary, which saw a slight drop since Q1. According to the report, the multi-family sector remains steady, and the transportation sector has kept pace with new roads and bridges being built. Then, of course, there’s the Green Line LRT project — the largest infrastructure initiative in the history of the city.