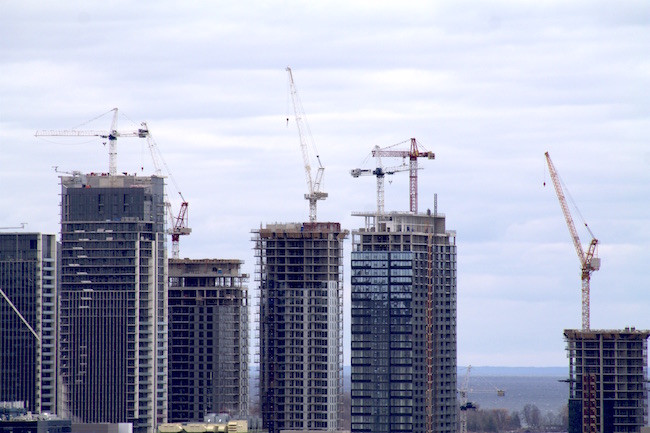 Construction cranes are ubiquitous in numerous parts of the city, including the Liberty Village neighbourhood

The city boasts 121 of the steel towers in the latest iteration of Rider Levett Bucknall Ltd.’s Crane Index, carried out in the first quarter of 2020. Toronto’s tally — one higher than the 120 it logged six months ago — represents more than a quarter of the 455 cranes across all 14 North American cities included in count.

With 47 cranes, Los Angeles follows Canada’s largest city as second on the list. Calgary (37), Seattle (36) and San Francisco (33) round out the top five.

RLB said the latest biannual report marks the fifth consecutive cumulative increase for the count, stretching back to 2017.

But uncertainty lurks on the horizon. As it has throughout other sectors of the economy, COVID-19 looks likely to derail growth in construction across the continent.

“Given the significant impact that COVID-19 and the governmental mitigation measures that have been applied to contain it are having on the economy as a whole, it is probable that this pandemic will drive a recession which will have an impact on future crane counts,” the quantity surveying and project management firm said in the report.

In Toronto, the lion’s share of the cranes (88) are working on residential towers. Mixed-use (24), commercial (5) and transportation (4) account for the remainder. Currently, provincial rules for preventing the spread of coronavirus exempt residential projects from closure, meaning most high-rise sites remain active. Due to enhanced sanitation and prevention measures, however, the pace of work has slowed.

“Obviously all projects, whether they have been stopped or still going, are going to have delayed completion dates,” Terry Harron, principal of Rider Level Bucknall, said. “So, I think once we start to emerge from this, all projects are going to be behind schedule and there’s going to be a great demand behind getting these projects finished.”

With the drive to finish ongoing work, Harron sees the market’s near-term prospects as good, but is less certain about the longer-term outlook. Among other issues, he pointed to immigration as a major question mark.

“The residential market has been driven mostly in the last few years with very high immigration numbers — 340,000 people entered Canada in 2019 and I think 120,000, approximately, ended up in the Toronto area. Those demographics are going to change this year big time because of the international travel restrictions.”

If coronavirus-related travel restrictions dent immigration figures over the longer term, Harron says it could lead to a slowdown in Toronto’s booming construction market.

Looking west, Calgary is the only other Canadian city included in RLB’s count. It added three cranes since the previous survey. Like Toronto, most (24 of 37) of the city’s tower cranes are tied up on residential work.

With the uptick, Harron said the residential market seemed to be staging something of a recovery in Calgary. Between the abrupt oil crash last month and coronavirus, however, that momentum could shift quickly.

While RLB’s crane index includes many of North America’s largest cities, including New York, Chicago and Phoenix, it is not an exhaustive list of all urban centres.