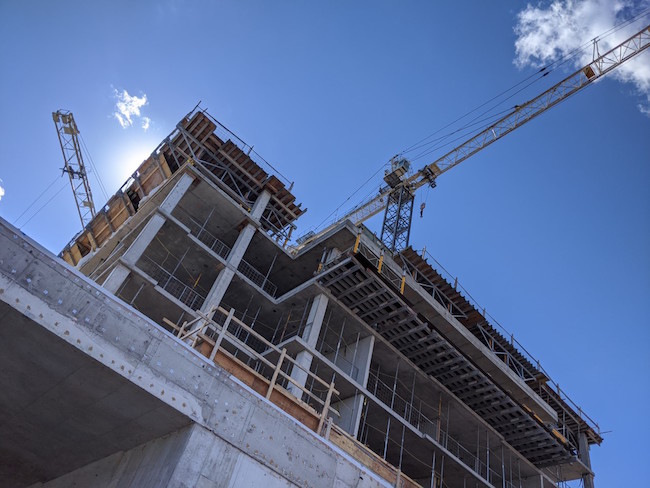 Construction on a new residential project on Toronto’s west end. Condo projects continue to account for the lion’s share of cranes across the city

Canada’s most populous city added three cranes since the previous count earlier this year, in spite of the COVID-19 pandemic that has forced contractors to adjust to heightened safety standards and a less optimistic building market. With 124 cranes jutting upward across the city, Toronto accounts for nearly 30 per cent of the North American total.

A rough measure of construction activity, RLB’s Crane Index tracks tower cranes in most of the largest cities in Canada and the U.S. — though several large urban centres are not take into account.

Seattle (43), Los Angeles (41), Washington D.C. (38) and Calgary (34) are Toronto’s closest competition in the third-quarter index, which was carried out in August.

Though the Toronto building market remain healthy about six months after the onset of the pandemic, COVID-19 may still take its toll. RLB noted high-rise residential sales have dropped 30 per cent in 2020 and added that the work-from-home trend could derail the commercial construction segment.

Across the broader market in Canada and the U.S., the consulting firm said COVID-19 looks likely to squeeze the industry.

“The pandemic-induced recession is going to have far-reaching effects,” Julian Anderson, president of RLB North America, said in a release. “Lenders are less likely to support large new developments in sectors that have been hard-hit, like sports and hospitality. As construction costs soften, we are already seeing more interest in the projects that are coming online.”

The Q3 index, published Oct. 1, also marks the first overall decline in cranes tracked since 2017. The total number of cranes in the 14 cities dropped by 40 compared to earlier this year, with five cities posting significant declines in their counts, four holding steady and four recording increases.