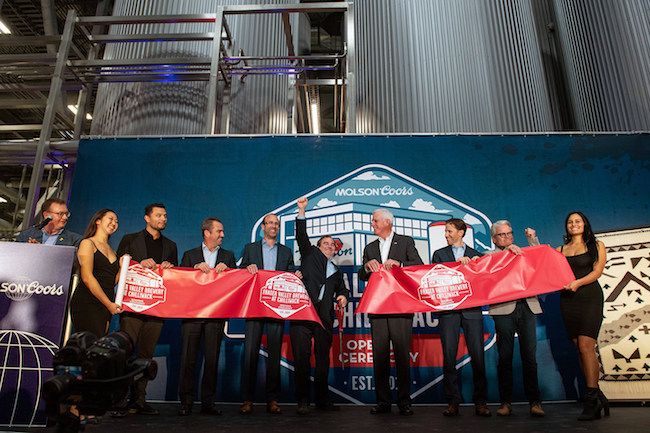 The ribbon cutting at the new facility, which was scaled up from its original design to meet potential added demand. PHOTO: Molson Coors Canada

CHILLIWACK, B.C.—Construction is complete on a major new brewery in British Columbia’s Fraser Valley after three years of work.

Top officials from Molson Coors Canada were on hand to cut the ribbon at the new plant that will serve Western Canada, as well as international markets via the Port of Vancouver.

Molson Coors said the new state-of-the-art site is the most modern of its 29 manufacturing locales. It replaces an aging plant in Vancouver the brewing giant disclosed plans to shut down in 2015.

Smith Bros. & Wilson (BC) Ltd. took the lead on construction of the new 37,400 square metre (approximately 400,000 sq. ft.) facility as the general contractor. The facility includes brewing and packaging halls, warehouse space, offices and a hospitality area. The site also has a large truck yard for offloading materials and loading finished products.

While the initial cost of the project was set at $200 million when work got underway in 2017, the brewer said scope changes meant costs climbed to $300 million by the end of the project. The original design took only domestic production into account and the plant was scaled up to meet potential international and expanded market demand, Molson Coors said.