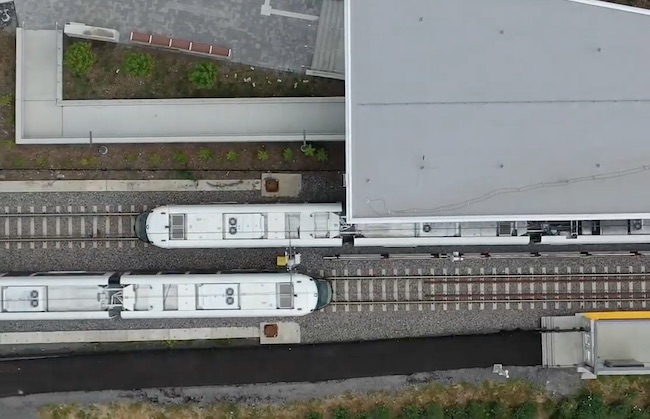 An aerial shot of two light rail vehicles on the new Confederation Line. The LRT includes 13 stations, four of which are underground. PHOTO: OCTranspo/YouTube

“Today really is the result of years of planning and extremely hard work,” the city’s Mayor Jim Watson, said at the launch Sept. 14. “I know that it hasn’t always been easy for our residents during this construction period and I want to take this opportunity to thank the people of Ottawa for your patience and understanding… This wait was necessary to deliver this safe, efficient and sustainable transit system to our city.”

The predominantly east-west-running transit line covers 12.5 kilometres, a fifth of which is buried under Ottawa’s downtown core. The system includes 13 stations, from Tunney’s Pasture in the west, to Blair Station in the city’s east end.

The launch event over the weekend, attended by Watson and other officials from all levels of government, was a long time coming.

Construction began on the project in 2013 and delays have forced the construction consortium taking on the job to delay the handover date several times. Rideau Transit Group (RTG) and the city are expected to end up to court in the coming months over the significant delays to the original timeline.

Nevertheless, with the LRT — officially O-Train Line 1 — now in service, moving about Canada’s capital is expected to get far easier for many commuters. Trains are scheduled to arrive every five minutes or less and will carry up to 10,700 passengers an hour at peak times. The city said it anticipates it will will be the busiest light rail line in North America.

Among the construction challenges on the transit project were three underground stations in downtown Ottawa connected through a 2.5-kilometre tunnel. Crews used the sequential excavation method (SEM) — also known as the new Austrian tunnelling method — for the tunnelling work. Over the course of the entire project, more than 3,200 person-years of trades employment was created, according to SNC-Lavalin Inc., one of the members of the RTG consortium.

The city, province and federal governments put up $2.1 billion in joint funding for the P3 project.

And there’s more to come. “We’re not stopping here”, Watson said, pointing to the next phase of Ottawa’s transit expansion, which is already underway.

The city approved a project known as “Stage 2” this March. The work will substantially scale-up the new Confederation Line, as well as add to the far less sophisticated Trillium Line, which was built in the early 2000s. All told, Stage 2 is expected to cost approximately $4.6 billion, extend the two lines by a combined 44 kilometres and add 24 new stations.