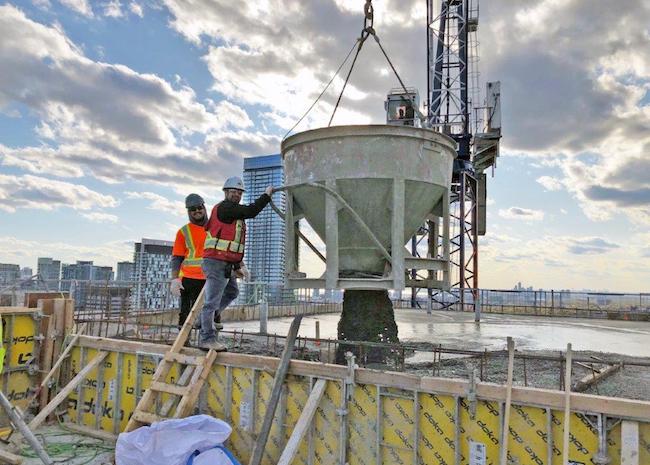 A pair of workers completing the final concrete pour on the 700 Bay project. PHOTO: PCL

PCL Constructors Inc. has wrapped up work on the concrete skeleton for a complicated building project in downtown Toronto.

The contractor, along with the building’s owner KingSett Capital, held a topping off celebration for the multifaceted job at 700 Bay Street Oct. 24. Workers recently completed the final concrete pour for the 32-storey renovation/expansion that includes a new tower built alongside and overtop of an existing 26-storey building.

“Construction of 700 Bay at Gerrard has required precise methodology to expertly tie renovations into a new tower, while minimizing impact to tenants and properties along Toronto’s hospital row,” said Kelly Wallace, vice-president and district manager for PCL’s Toronto operations, in a release. “PCL is honoured to share this milestone with our partners, subcontractors, suppliers and over 400 workers who have all played a role in bringing KingSett’s vision for this project to life.”

The wholly new part of the building rises out of what was once a seven-level parking garage on the west end of the site. Crews tore down the two above-ground levels of the parking structure and cleared the five below-grade floors to create space for the new building’s foundation. Priestly Demolition Inc. was the subcontractor for the demolition work. The top floor of the existing tower at 700 Bay was also demolished so the building could be structurally reinforced, reshored and a crane installed on the roof.

PCL and it contractors then turned their efforts to building the new tower and the six-floor overbuild of the existing building. With the concrete structure in place, interior and exterior work will be the focus during the coming months.

The project is expected to be complete by next summer.