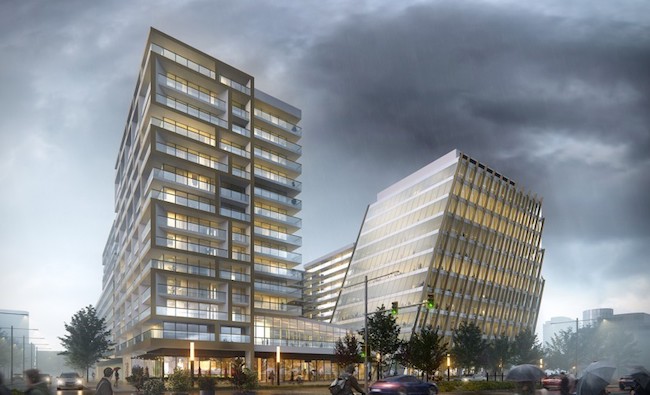 VANCOUVER—After tearing down a strip mall that once stood on the northeast corner of Cook Road and No. 3 Road in Richmond, B.C., Graham Group Ltd. has begun building a new four-tower development in the Metro Vancouver city.

Known as the Paramount, the mixed-use project includes more than 600,000 sq. ft. of floor space, made up of about 500 condo units, a 12-storey office tower, retail areas and a daycare. The development’s three residential buildings will stand slightly higher than the adjacent office tower at 15 storeys each, while all four buildings will share a four-level parkade/podium that extends across the entire site and has room for about 600 parking spaces.

Graham said the new development next to Richmond–Brighouse Station — the end of one arm of the SkyTrain’s Canada Line — will cost $267 million.

The Calgary-headquartered contractor has been involved in the project since late 2018 and completed demolition and other early site preparation this January.

Work on the building phase has since started, beginning with bulk excavation. The shoring and dewatering processes is being taken care of under a separate contract, Graham said. The parkade, podium and all four towers will go up using the cast-in-place concreting technique. The facades for the office and residential towers will differ, however, with the office tower using a curtain wall and the residential buildings employing window wall systems.

Construction crews, designer GBL Architects and the site’s developer, Keltic Canada Developments Ltd., are targeting a LEED Silver certification for the majority of the project.

Construction is expected to run about three years, wrapping up in April 2022.