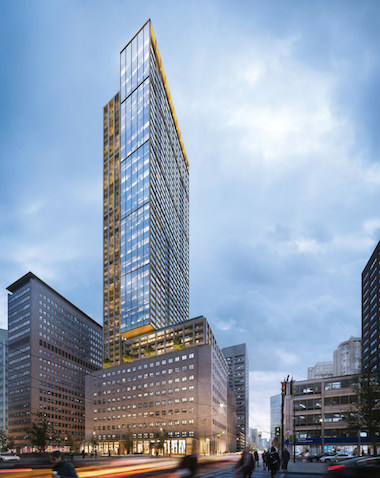 A rendering of the new tower that will rise out of the nine-storey heritage building. PHOTO: Davpart Inc.

TORONTO—The historic Toronto offices of the once-mighty Canadian publishing house Maclean-Hunter is in for a major overhaul.

The company described the facelift and new project construction as the tallest architectural heritage retention development in North America.

“The existing structure is an example of a commercial building from the interwar era and is the result of many bold design influences, from Beaux-Arts to Modern Classical,” David Hofstedter, the company’s president and CEO, said in a statement.

The location was home to Maclean Publishing — later Maclean-Hunter — from 1909 until it relocated to nearby College Park in 1983.

While several offices once stood on land, comprising the northeast corner of University Avenue and Dundas Street West, two adjoining towers now occupy the site. According to the design firm, one is a collegiate gothic building dating to the 1930s, the other is a midcentury stone tower completed in 1961. The site is designated as a heritage property with both the province and city.

Davpart plans to rebrand the tower as the United Building.

The design team for the project is made up of: B+H Architects as prime consultant and design architects, plus heritage consultants ERA Architects Inc. and Tomas Pearce Interior Design Consulting Inc.

Neither the general contractor for the project nor a timeline for construction has been confirmed.