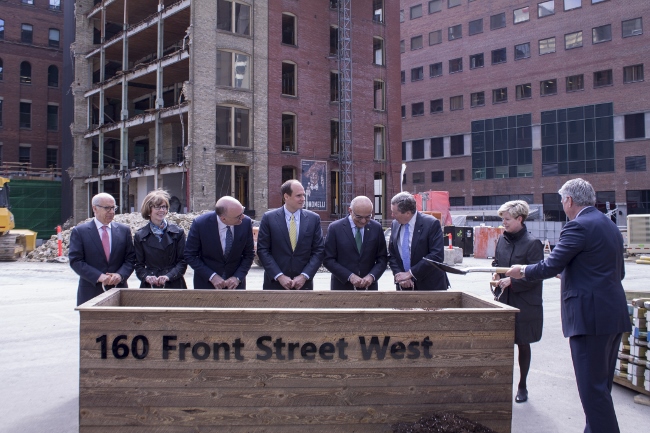 Work on the 46-storey project at 160 Front Street is expected to take about three 1/2 years. Cadillac Fairview (CF), which is controlled by the Ontario Teachers’ Pension Plan, had pegged the cost of the development at about $800 million last July, but said at the groundbreaking that it and its partners will invest over $1 billion in the project.

As the back-up beeper on a reversing hauler droned behind him, John Sullivan, CF’s president and CEO, said the company was committed to hitting its targets on the tower that will include well over one million sq. ft. of office space.

“First and foremost… notwithstanding we’re having this great event today — we have all these people here — we do not stop work,” he said. “We will deliver this on-time and on-budget and our commitment stands right behind me.” 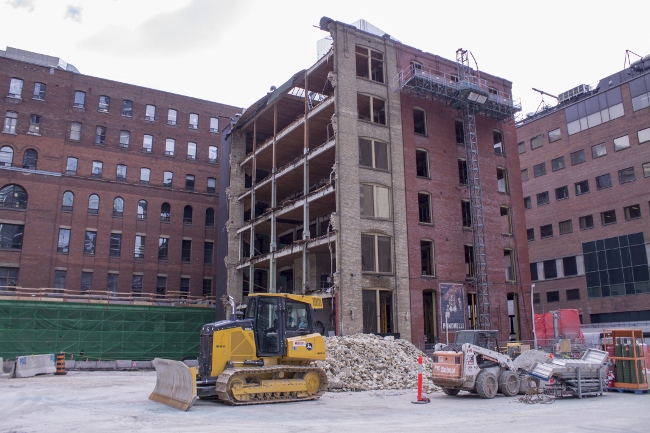 The facade of a six-storey heritage building will be integrated into the new tower. PHOTO: David Kennedy

Crews are currently working to finish dismantling part of a six-storey heritage building that once stood on the site. Its masonry facade will be integrated into the new tower. The main construction on the project will commence once this and other pre-construction work is complete.

PCL Construction is serving as the general contractor for the major building project. 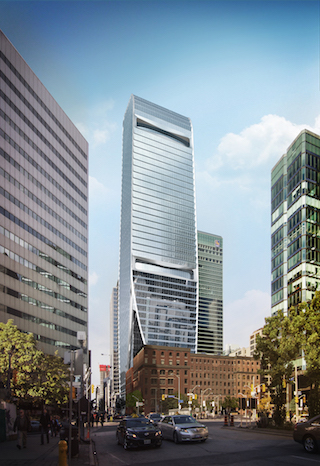 An early rendering of the new office tower. Its tapered design will resist wind and minimize the building’s impact on pedestrians. PHOTO: AS+GG

Meanwhile, the prominent Chicago-based firm, Adrian Smith + Gordon Gill Architecture oversaw the design of the tower, along with Toronto’s B+H Architects. AS+GG said the building will feature floor-to-ceiling glass, a green roof at the podium level and a tapered design at both the top and bottom to resist wind and minimize the building’s impact on pedestrians.

With Cadillac Fairview targeting a LEED Platinum designation for 160 Front St., numerous energy- and water-saving systems have also been integrated into the design.

Even before the first building materials have arrived on-site, the tower is 100 per cent leased. Earlier this month, TD agreed to lease 33 floors of office space. Ontario Teachers’ is the building’s other major tenant.

Construction on the tower is scheduled to wrap up by fall 2022.