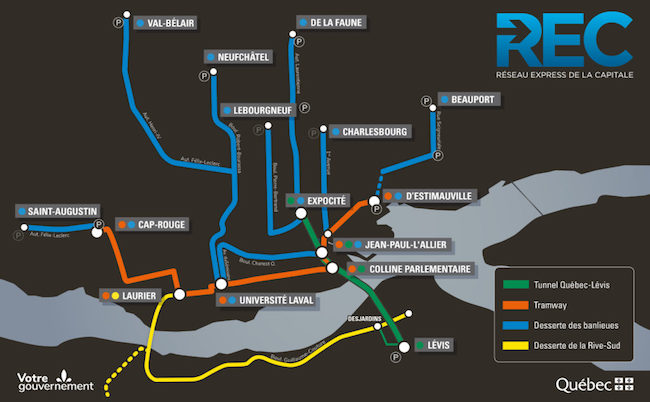 A map of the provincial government’s plan for Quebec City. The new tunnel is highlighted in green. PHOTO Government of Quebec

QUEBEC—A tunnel to be built under the St. Lawrence River connecting Quebec City and Levis, Que., will cost $7 billion, take 10 years to complete and will transform the capital, Premier Francois Legault said May 17.

The tunnel was a major campaign promise for Legault’s Coalition Avenir Quebec, which enjoys strong support in the provincial capital and promised to begin the project within its first mandate.

“We’re delivering the goods,” Legault boasted to reporters after announcing details of the project, on which construction is scheduled to begin in 2022 — the same year as the next provincial election.

“We have fulfilled our promise,” Legault added.

Legault said the final price tag could rise by as much as 35 per cent when borrowing and other unexpected construction-related costs are factored in.

The 8.3-kilometre tunnel will have a lane dedicated for electric buses and will become the third road link connecting Quebec City to the south shore. Its diameter will be 19.4 metres, traffic will be distributed on two levels and it’s expected 50,000 cars will use the tunnel per day.

Legault said he hoped the federal government will provide a “significant amount” of money to help finance the project.

The tunnel is the second major project announced this year by Legault for the provincial capital, following a $3.3-billion, 20-kilometre tramway system that is expected to be completed in 2027.

The specifics about the tunnel (French only)