Quebec City consumed by debate over new span across St. Lawrence that could cost up to $10B 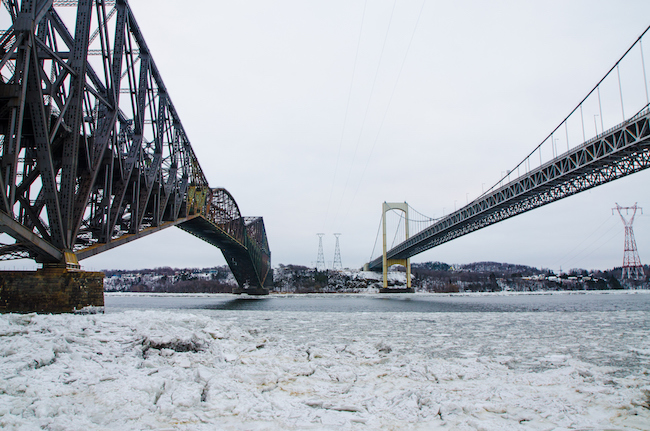 Newspapers and talk radio stations are consumed by the debate, and journalists regularly question politicians about the project.

The third link is described either as an essential new route that will alleviate traffic congestion and increase economic growth or as pure folly — an outdated idea from a culture obsessed with cars and blind to the possibilities of public transit.

Others have called the project a “chimera,” foisted upon hapless residents by right-wing radio hosts. Rarely has a proposed piece of public infrastructure taken on such a mythical quality in Quebec’s public discourse.

The new provincial government, whose electoral base is in and around Quebec City, campaigned last September on a promise to build the third link and to have the “first shovel in the ground” before the end of Premier Francois Legault’s first mandate in 2022.

But a younger generation of city dwellers and left-wing politicians have launched a battle to convince residents of the province’s capital that the two bridges already connecting the shores of the St. Lawrence are enough.

“People who opposed the project were quiet before the (Oct. 1) election,” said Universite Laval political science professor Jean Mercier, an urban transport expert. “Now, there is a frontal attack on the third link.”

That attack is led by Quebec solidaire, the left-wing party founded in 2006 that broke out of Montreal for the first time last election with two seats in the Quebec City core. One of those members is Catherine Dorion, who recently compared the third link to cocaine.

“A new highway is like a line of coke,” Dorion says in a video she made last November. “People say: ‘I’ll take it. I’ll be less drunk. I’ll get some energy.’ But one hour later what happens? You need another line of coke. That’s our problem. It’s an addiction to cars.”

Other third-link opponents are students and “millennials” working in the IT and video game industries in gentrified areas west of the historic old town, Mercier said.

“These people live downtown. They say they want to live in a real city,” Mercier explained. “And a real city has a public transportation system. These people have a new voice in this (debate).”

What sets the third link project apart is how popular it is among the majority of residents and how determined the government seems to be to build it, despite opposition from most transportation experts. Estimates of the project’s cost range from $4 billion to $10 billion.

Economist Jean Dube, also of Universite Laval, said the argument that the third link would reduce congestion doesn’t hold up. Many studies have shown that people move further away from downtown when new highways are built, extending urban sprawl and eventually congesting the new roadways, he said.

“On an economic level it’s also hard to justify,” Dube said in an interview, adding that serious traffic jams in the city only occur when there are car crashes on or at the entrances to the two existing bridges. Public transit is considered by many to be poor person’s transportation, he added. “The car is still seen here as a symbol of success.”

Mercier agrees with Dube that the third link project has gotten the green light because politicians are eager to please motorists.

But it will be a tall order to get construction started before 2022, he said. The project is currently under study, and a report commissioned by Mayor Regis Labeaume last February indicated it would take up to 16 years to build a new bridge and 17 years for a tunnel.

“The Coalition Avenir Quebec won’t be the first government that doesn’t fulfil all its election promises,” Mercier said.

For now, motorists in the city are left with two, side-by-side spans connecting the river’s shores: the Pierre Laporte Bridge and the Quebec Bridge. There is also a ferry from Levis on the south shore.

And it’s not as though the city’s leaders are ignoring public transit. Labeaume last March announced a 23-kilometre electric tramway project he hopes will be operating by 2026. Unlike the third link, the federal government has signalled it will help finance the tramway.