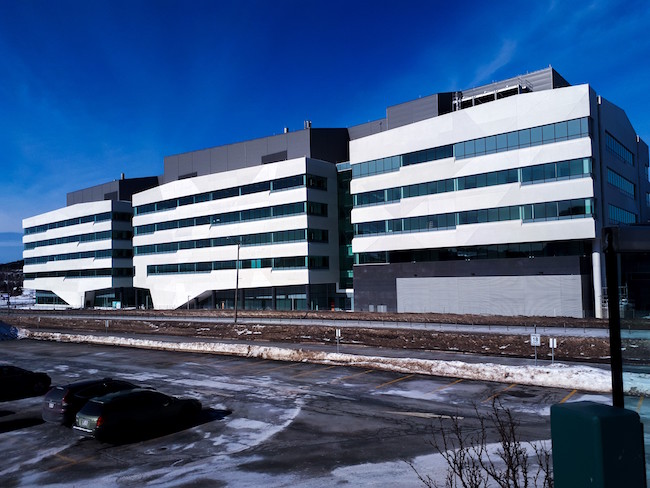 Already a landmark on the St. John’s, N.L. campus, the five-storey, 840,000 sq. ft. research and teaching facility sits like a beacon beside Prince Philip Drive. Designed by HOK Architects and Hearn Fougere Architects to resemble the icebergs commonly found off the coast of Newfoundland and Labrador, it combines three pavilions connected by glass enclosed walkways.

When operational, the facility will contain laboratory and teaching spaces for the Faculties of Science and Engineering and Applied Science and will also be home to the Ocean Frontier Institute — a partnership between Memorial University, Dalhousie University and the University of Prince Edward Island focused on safe and sustainable ocean development. It will mark a dramatic improvement to the university’s existing science facilities, most of which have reached the end of their life cycles, the Memorial project website says. In turn, it will enable the university to recruit world-class faculty and attract a greater number of graduate students.

Atlantic Canada-based general contractor Marco Group is pleased to report that Memorial will begin their move-in this summer and the building is scheduled to open for the fall 2021 term.

The five women leading the MUN project. Currently, 27 per cent of employees at Marco Group are women, compared to roughly 13 per cent for the overall Canadian construction industry

Marco didn’t deliberately set out to establish a team predominantly led by women, rather, the team emerged organically as individuals were assigned to the project. The end result is proving to be a great success, said Marco’s senior vice-president of Major Projects, Jeremy Stewart.

When asked if a team of women leaders makes a particular difference in the way a project is run, Buckler said she didn’t see gender as the differentiator.

“It’s more about the personalities of the individuals,” she said. “This project is very fortunate to have women setting the goals and ensuring whatever work is necessary to meet [them] is done. I hope that such a large project with mostly women in these key roles encourages other women to push for these positions. I hope it inspires other companies to do the same — to give more opportunities to women in leadership roles.”

As far as the reception the team has received goes, reactions have been positive. “I’ve never been treated any differently from anyone else,” Megan Kavanagh said. “I work hard to get the project done and I think people respect me for that.”

Pittman said that after 15 years in the industry, it’s been a long time since someone has questioned her authority. 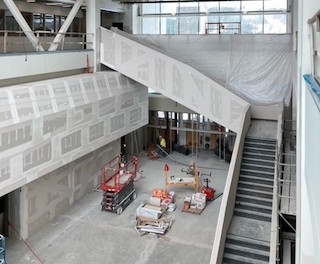 “I lead daily meetings with multiple subcontractors and any issues I encounter are generally related to personality rather than gender,” she said. “I’m comfortable discussing construction issues that arise, and am experienced at resolving conflicts, so people respect my involvement and input.”

Likewise, Stephanie Parrell said, “You have to have a thick skin in this industry and not take things personally, I think that goes for everyone. I may occasionally see someone react in surprise because I’m young, but I’ve never had someone make me feel unwelcome because I’m a woman. I think most people just accept that this is the way the world is now.”

According to the latest figures from industry researcher BuildForce Canada, women account for approximately 13 per cent of the Canadian construction industry’s total workforce. 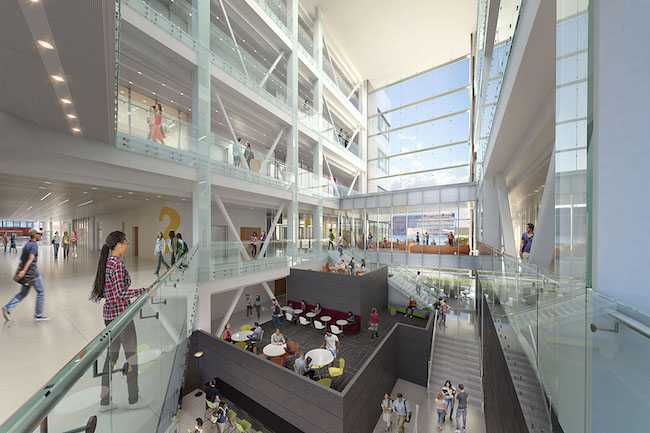 A rending of the completed atrium at the new science and engineering facility. PHOTO: Marco Group

To help lift this number, Parrell said more women need to see construction as an option early on. “It can be daunting to enter the industry if you haven’t been exposed to it from a young age like I have, and I think that some women just haven’t considered it an option,” she said. “I think that as more women in the industry share their stories, it will shine a light on this career path for younger women and encourage them to choose this as a career.”

Buckler agrees. “I stumbled upon [construction] in high school [when] I took a course that included a drafting semester” she said. “If it was not for that one class I doubt this is the career I would have pursued. If there was more exposure during school I think more women would get the opportunity to work in an industry they otherwise never would have been exposed to.”

Kavanagh wants to see the focus on diversity also extend to the trades. ”I think more emphasis on women working in the trades would help the industry to gain more diversity,” she said. “Currently, from what I see, women are increasing in management roles, but the trades appear to fall behind.”

With women like Marco’s team for the MUN Core Science Facility leading the way, the next generation is certain to have some strong role models to inspire them.

Cathy Carter is a marketing coordinator at Marco Group.