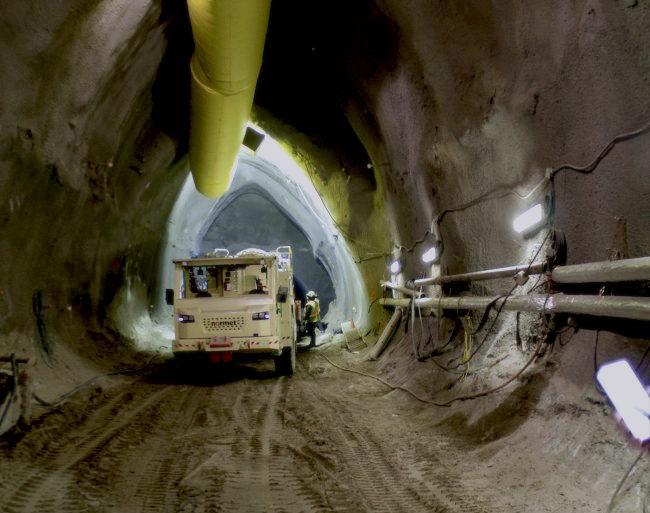 Underground work on Avenue Station, a stop on the original Eglinton Crosstown, in 2018. The extension will stretch the line 9.2 kilometres west

Infrastructure Ontario (IO) and Metrolinx have singled out two build teams as the First Negotiations Proponents (FNPs) for a pair of upcoming transit tunnel construction projects.

A consortia headed by Strabag AG was named as the top bidder for the Scarborough Subway Extension, through a separate procurement process running on the same timeline.

Each design, build and finance contract covers just tunnel construction for the respective project, with separate tenders for station construction, tunnel fit-out and commissioning of the transit lines to come later. IO and Metrolinx said selecting the FNPs is the first step in its negotiations process for the projects. The Crown agencies will now move forward with finalizing the details with each consortia “to ensure that each team has a proposal that provides the best value for the province.”

If the negotiations progress as planned, the province and the two build teams are expected to reach financial close on their contracts this spring. The final financial details for the projects are not yet available, but IO lists each project as worth more than $1 billion in its most recent P3 Market Update.

Tunnelling for the Eglinton Crosstown West Extension will cover roughly six kilometres, while the Scarborough Subway Extension requires a 7.8 kilometre tunnel. The construction teams will be responsible for digging the tunnels, building launch and extraction shafts and constructing headwalls for emergency exit buildings and stations. They will also need to source tunnel boring machines and installing segmental precast concrete tunnel liners.

Early work on both projects will get underway shortly, with tunnel boring expected to start next year.