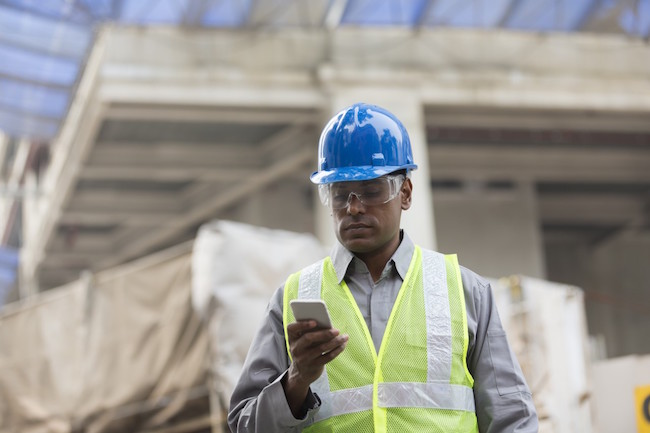 Record keeping is an onerous but necessary part of construction. On complex jobs, just ensuring on-site staff are up-to-date can be a challenge. Keeping all project stakeholders dialled into day-to-day progress and preserving detailed records for months or years is an even taller order.

“It really comes down to the most efficient way of communicating on the project,” Anthony Coelho, the company’s CEO and co-founder, said. “We’ve found this through media and we’re trying to give the industry something that’s as easy as taking a photo.”

Folding together construction expertise and insight from popular media-centric social networking platforms like Instagram, SiteVue is giving contractors, subcontractors, owners and others involved in the building process a new way to keep tabs on projects, improve collaboration and make use of advances in artificial intelligence.

Traditionally, photos and videos have been a supplemental part of the record keeping process. SiteVue aims to turn this on its head, making media the primary piece of information supported by captions and other types of brief mark-ups. Instead of requiring stakeholders to read through long written records, the platform lets everyone involved in a job catch up on the latest developments at a glance.

“What it really does is modernizes our record keeping, keeps all our photos organized [and] captions dated,” said Tim Cape, a project manager within engineering firm Aecom’s P3 Advisory Services group. The software lets on-site crews make better use of the photos and observations logged on their phones, synthesizing a wide range of information into daily reports that can be shared with the whole team, Cape added.

Aecom first implemented the software on the Highway 427 expansion project at the north end of Toronto, for which it was providing contractor oversight services for the provincial agencies funding the work.

“All of it kind of comes back full circle because throughout the life of a big project like this, you have to think about your project risk and if there’s any future claims down the road, it lowers your risk and liability to have all of your observations completely organized and at the fingertips,” Cape said.

Aecom plans to continue experimenting with the software. It recently committed to rolling it out on three other Toronto area projects, including the Finch West light rail line and an expansion of Highway 401.

Coelho breaks down the company’s software offering into three main modules: photo mapping, issue tracking and custom report generation. Though still in the start-up phase, over the past three years, the Waterloo-based firm has made some considerable headway, seeing its platform implemented on several major building projects with big-name clients.

Black & McDonald Ltd. has also been putting the software through its paces on several Ontario jobs. The contractor used it during construction of a 17-turbine wind farm near Wheatley, a Hydro One substation in the Leamington area and, coincidently, on the Hwy. 427 extension.

Chuck Mossman, vice-president for the Southern Ontario Utilities Region at Black & McDonald, said the company has used it mainly to ensure quality and to keep a photographic log of construction progress.

“It helps us with our monthly reporting as well, when we’re trying to substantiate our progress draws,” he said. “And if there’s ever questions about work that was done — you know someone might have an issue with the quality — we can show them the picture and if there were damages after-the-fact, say ‘Hey, it wasn’t our problem. This is how we left it.’”

Mossman hasn’t needed to put SiteVue to the test in this capacity yet, but pointed to a recent dispute where he wished he’d had the software employed.

“The client was having a hard time understanding where our claim was coming from and if I’d been able to demonstrate it with a lot more pictures and relate that to a drawing, I think we would have had an easier time trying to convince him of our entitlement,” he said. 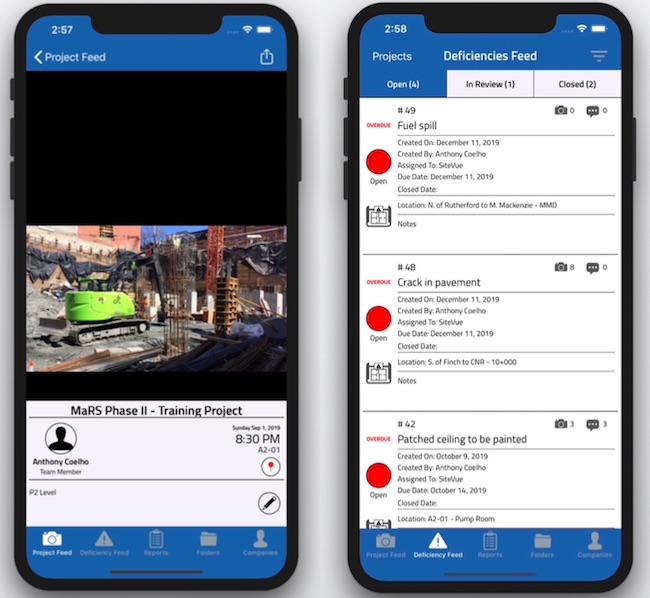 Screenshots of two of the separate feeds SiteVue displays. Currently, the company offers three main modules and is developing two others. PHOTO: SiteVue

“If you took a photo of an excavator, it’ll tag the excavator,” Coelho said. “It will tag the make — whether it’s Cat, even if it’s company-branded like GFL — and then we’ll also tag all the materials, so if there’s concrete or soil, or reinforced steel, it will add all that to these photos, just to make it easier for our clients to search and filter their media.”

Filing the information away in the cloud is another benefit.

“It takes a lot of the manual process away,” Mossman said, pointing to past processes that inevitably led to some photos and documents being lost on employee phones or laptops without ever being saved elsewhere. “Here, you upload them, they go to a central repository and that information is available.”

With data stored in the cloud, access to project files can be shared with other stakeholders, providing added transparency during the building process and allowing for more collaboration, Coelho noted.

“A lot of those things are time-sensitive and if they’re not reported right away and people aren’t notified right away, there could be major consequences,” Cape said. “SiteVue really helps us to make sure that that information moves as fast as possible.”

Based out of the Commitech hub in Waterloo, Ont., SiteVue has also worked with a number of other local contractors, such as Buttcon Ltd. and Allied Construction Group. While the company is scaling up at the same time the market for construction technology is blossoming, the growing tech space also means it’s facing off against some sizeable competitors.

Coelho pointed to Procore Technologies Inc. and Hexagon AG subsidiary Multivista Systems as two of the companies SiteVue’s offering overlaps with. The newly-minted tech company chief, who spent about four years with PCL Constructors Inc. as a superintendent and junior project manager before striking out on his own, says the company is leaning on its media-centric approach and image recognition technology to differentiate itself. Like many other software firms, the company is using a tiered subscription-based pricing model.

Despite SiteVue’s success, there have been some growing pains.

Both Cape and Mossman, for instance, pointed to the app running initially only on Apple’s iOS operating system as an obstacle. With Black & McDonald relying more on Google’s Android platform traditionally, Mossman said his teams needed to pick up several iPads to make use of the software.

It was a similar story at Aecom.

SiteVue has since come out with a web application geared toward office staff and plans to release a version of its app for Android this year.

Meanwhile, the company continues to build out its offering through new modules. Coelho said the team is currently developing a project analytics dashboard and a module that focuses on the testing and commissioning phase of construction.