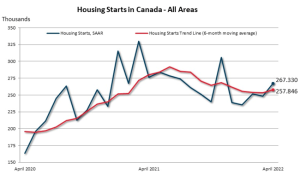 Canada Mortgage and Housing Corporation (CMHC) reports the trend in housing starts reached 257,846 units in April, an increase from 253,226 units in March. This has the six-month moving average of the monthly seasonally adjusted annual rates (SAAR) of housing starts remaining at historically high levels.

“On a trend and monthly SAAR basis, the level of housing starts activity in Canada remains historically high, hovering well above 200,000 units since June 2020 and increased from March to April,” said Bob Dugan, CMHC’s chief economist. “The increase in monthly SAAR housing starts in Canada’s urban areas was driven by higher multi-unit and single-detached starts in April.”

CMHC uses the trend measure as a complement to the monthly SAAR of housing starts to account for considerable swings in monthly estimates and obtain a clearer picture of upcoming new housing supply.

The standalone monthly SAAR of total housing starts for all areas in Canada in April was 267,330 units, an increase of eight per cent from March. Within those figures, urban starts rose 10 per cent to 245,324 units, with multi-unit urban starts up 14 per cent.