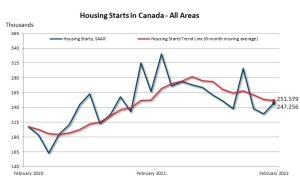 Canada Mortgage and Housing Corporation (CMHC) reports that the trend in housing starts hit 251,579 units in February, down from 253,864 in January.

“Among Montreal, Toronto and Vancouver, Toronto was the only market to post growth in total SAAR starts in February, due to higher single-detached and multi-unit starts,” says Bob Dugan, CMHC’s chief economist.

The seasonally adjusted figures for both single-detached and multi-unit starts increased in urban areas in February, although actual starts in centres with populations over 10,000 were off by 14 per cent in the single-detached segment, and up two per cent in all other housing, including large multi-family units.