Level of starts activity in Canada remains historically high, however. 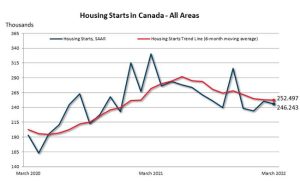 Canada’s trend in housing starts landed at 252,497 units in March, down slightly from 253,296 units in February, according to Canada Mortgage and Housing Corporation (CMHC). This trend measure is a six-month moving average of the monthly seasonally adjusted annual rates (SAAR) of housing starts.

“On a trend and monthly SAAR basis, the level of housing starts activity in Canada remains historically high, hovering above 200,000 units since June 2020; however, the trend in housing starts posted a small decline from February to March,” said Bob Dugan, CMHC’s chief economist. “The decline in the monthly SAAR housing starts in Canada’s urban areas was driven by lower multi-unit starts, which were partially offset by higher single-detached starts in March.”

The standalone monthly SAAR of total housing starts for all areas in Canada in March was 246,243 units, a decrease of two per cent from February. Multi-unit urban starts were down five per cent, to 154,876 units, while single-detached urban starts increased eight per cent, to 65,832 units.