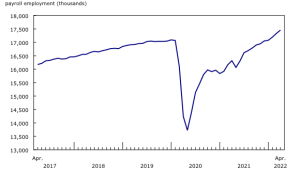 According to figures released by Statistics Canada, nearly all industries within the construction segment had surpassed pre-COVID payroll employment levels as of April of this year. The residential building construction sector was furthest above its February 2020 level with its 11.5 per cent gain coinciding with a 27.8 per cent increase in housing starts over the same period. Land subdivision, which is just 200 positions shy of its pre-COVID levels of employment, was the lone industry in construction to remain below its February 2020 level.

For the month, payroll employment in construction increased by 10,500 in April, a jump of almost one per cent. Gains were led by Alberta’s rise of 4,900 positions, a 2.8 per cent increase. Nationally, gains were spread across nearly all industries within the sector.

Taking a broader look across all employment sectors, the number of employees receiving pay or benefits, as measured by the Survey of Employment, Payrolls and Hours, increased by 126,000 in April. Gains were spread across all provinces except for Quebec, which reported little change.

Much like in the construction component, April was the first time that payroll employment in all provinces had either returned to, or surpassed levels seen in February 2020, prior to the COVID-19 pandemic. As of April, all provinces had eased public health measures around capacity limits, allowing most businesses to operate without pandemic-related restrictions.

Across all sectors, employers in Canada were actively seeking to fill about one million vacant positions at the beginning of April, up 2.4 per cent from the previous month, and 44.4 per cent from April 2021.

Job vacancies in the construction sector reached a new high in April, with 89,900 openings. That is up 15.4 per cent from March, and more than 40 per cent from April of last year. The job vacancy rate was 7.9 per cent in April 2022, the highest monthly rate in the sector since comparable data became available in October 2020.