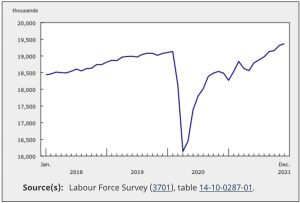 Strong upward trend in employment from May to December. (Source: Statistics Canada)

Statistics Canada reports that there were more people working in December than November. Consolidated employment rose by 55,000 positions, including some 27,000 in the construction sector.

The rise in the construction segment was the first gain in the industry since August. Nationally, most of the growth was concentrated in full-time work and among paid employees. Despite the gains, employment in construction remains 2.7 per cent, or 41,000 positions, below its pre-COVID/February 2020 level.

Overall, full-time employment was strengthened with 123,000 new positions while the number of people working part-time declined by 68,000 positions. Full-time employment has trended up since June, landing 1.6 per cent higher than its pre-pandemic February 2020 level in December.

The gains were not enough to significantly impact the unemployment rate, however, which was little changed at 5.9 per cent.

The December data reflects labour market conditions during the week of December 5 to 11, when public health measures were largely similar to those in place in November. The widespread emergence of the Omicron variant, and associated adjustments to public health measures, occurred after the December reference week, which could be reflected in next month’s report.