CCE gets it done 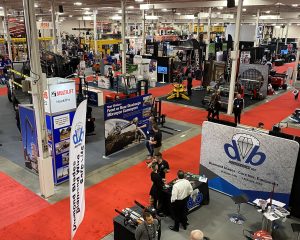 With more than 4,000 people filling the aisles and over 800 attending conference educational sessions and product demonstrations at Mississauga, Ontario’s International Centre on May 18 and 19, it’s safe to say that the Canadian Concrete Expo (CCE) has made a successful post-pandemic return.

Canada’s only national trade show dedicated to the concrete and cement industries, the fourth edition of the annual event featured more than 300 exhibitors and over 30 live presentations.

“Booths were very busy during peak periods and exhibitors have reported significant business activity,” said the show’s president, Stuart Galloway. “Plus, several companies sold large equipment and many have expressed an interest in expanding their booth at the 2023 show.”

In some cases, even the unexpected could not get in the way of connecting to make sales happen. Somero, despite suffering logistical problems that prevented them from bringing the equipment they wanted to the show, still sold three machines. And first-time exhibitor Imer sold a concrete mixer on a truck chassis.

Other companies expressed similar satisfaction with the quality of the visitors at the show.

Jeff Loberg, regional sales manager for KCP Pumps, was happy with his company’s sales leads, which he said were not surprising given the strength of the concrete pump market during most of the pandemic.

Also happy with the visitors to its booth were the team at Conjet, a manufacturer and distributor of hydrodemolition equipment. “It’s the first time for us at the Canadian show,” said North American national accounts manager Rick Larsson. “I feel like the atmosphere is that people want to be out to shows again and meeting people live.”

“The people that came to our booth were coming with intent,” added Arabi Siva at the Procore booth. “These are people who are aware of Procore and are coming in for a conversation.”

While some came to the show already armed with information, many others took in sessions, to learn more about the industry’s hot-button topics.

“We have to start thinking about carbon impacts when it comes to procurement,” stated Sarah Petrevan of the Cement Association of Canada (CAC) as she took part in a panel discussion about net-zero and the role of cement in future builds moderated by former CAC president Mike McSweeney. He stated that the construction industry needs to consider the use of building materials with the longest lifespans, lowest carbon footprints and are put in place using the best technologies if Canada is going to reach its net-zero goals. 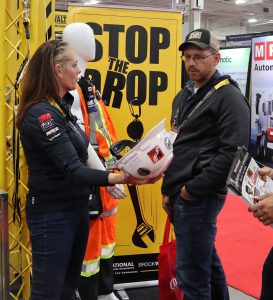 The next edition of the Canadian Concrete Expo will be in 2023 as it moves to its usual month of February. The 2022 event was postponed by a couple of months due to COVID-19 protocol concerns, but that put the show into the working season for many in the industry.

“Returning to the show’s regular show dates will significantly boost attendance,” stated Galloway. “Contractors risk losing money by stepping away from their job sites, and we had some sunny weather during the 2022 show, but, that didn’t stop people from attending who want to conduct business with one or more exhibitors.”

Next year’s CCE will once again be held at the International Centre, running on February 16 and 17. For more information, visit www.canadianconcreteexpo.com.