New Toronto hotel will offer accommodations on the edge of iconic tourist destination. 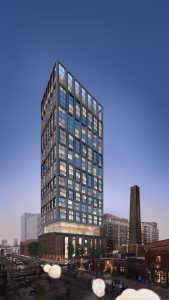 Easton’s Group of Hotels has announced it will build Canada’s only Curio by Hilton, at the entrance of Toronto’s historic Distillery District. Located at 60 Mill St., the project will be the last remaining heritage building to be re-purposed in the district.

Rising 31 storeys, the full-service hotel will preserve the heritage building’s exteriors as its base three floors and will offer 288,000 sq. ft. of floor area, including 392 guest rooms, conference spaces and a rooftop bar and restaurant.

The project is being led by a team that includes IBI Architects, ERA Heritage Architects and Studio Munge, and will pay homage to the building’s rich history as a rack house built in 1890. The building previously stored up to 15,000 barrels of alcohol as part of the liquor manufacturing operations of the Distillery District, until its closure in 1990.

While the tower emerges from the top of the heritage building, it will feature “reveal floors,” which will be significantly set back to allow for a distinct visual separation between the old and the new. The entire volume of the existing heritage building will be publicly accessible to highlight the past use of the building to all visitors.

“We’re thrilled to bring Curio by Hilton to Canada, supporting the Distillery District as a vibrant community and tourist destination that is highly in need of hotel accommodations,” stated Steve Gupta, founder and chairman of The Gupta Group. “Working with an immensely talented team of architects and designers, Easton’s Group of Hotels will restore this historic building and transform it into a cherished landmark, celebrating its prolific history while leaving a legacy for decades to come.”

Construction is expected to begin in the middle of this year.

The Easton’s Group of Hotels’ flagship hotel properties include brands such as Hilton, Marriott and Holiday Inn, in several locations in Ontario and Quebec, including Toronto and Montreal.