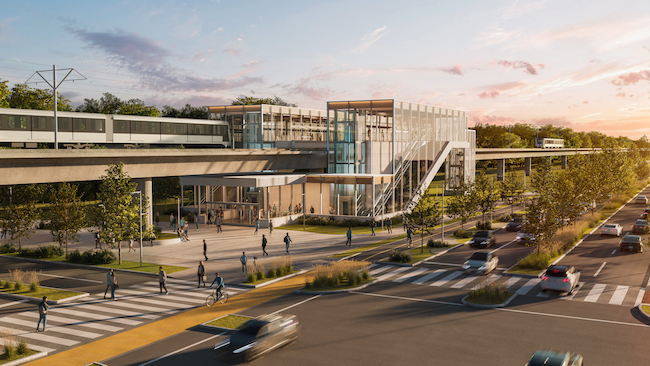 A rendering of an elevated station on the proposed network. The new line would consist of stops both both and below ground. PHOTO: CDPQ Infra

It will be at least another a year before the first phase of Montreal’s new Réseau express métropolitain (REM) carries its first passengers, but the driving force behind the project is already looking to expand the new light rail network.

In a press conference Dec. 15, CDPQ Infra, alongside Quebec Premier François Legault and other officials, announced a plan to extend the yet-to-open transit system to the east along two additional spurs.

“We are announcing the largest investment ever made in public transit in Québec, with major economic benefits,” Legault said in a release. “The east end of Montréal has great economic potential, but at the moment, public transit services in this part of the city are not up to par.”

Plans for the REM de l’Est project include 23 new stations and 32 kilometres of light rail tracks, both above and below ground. CDPQ Infra, a subsidiary of Caisse de dépôt et placement du Québec, noted the proposed extension would stretch the overall REM to 99 kilometres, making it one of the largest automated transit networks in the world.

The currently approved map of the REM network covers 26 stations, with track running predominantly northwest from Brossard, Que., through downtown Montreal, before splintering into three segments toward Deux-Montagnes, Anse-À-L’orme and Montréal-Pierre Elliott Trudeau International Airport. Construction began in 2018 and is now expected to be complete by 2024 — following significant adjustments to the construction schedule this fall. 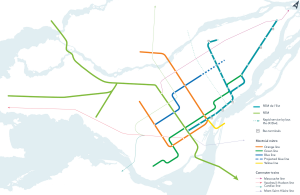 A map of the proposed system and its interconnections. Click to enlarge

The original REM was expected to cost $6.3 billion, though that figure is nearly certain to be revised upward due to the COVID-19 pandemic. Costs for the eastern extension are even higher. CDPQ Infra disclosed $10 billion as an early estimate for the new REM de l’Est.

The transit work would create roughly 9,000 direct and indirect jobs per year during construction, with much of the work taking place above ground. After carrying out numerous corridor studies, CDPQ Infra settled on elevated rail as the best solution for the majority of the route. One exception is an underground segment on the northeast spur.

Along with interconnections with the under construction REM network, the REM de l’Est would also tie into the Montreal Metro’s Green, Blue and Orange lines. Once operational, the fully automated, electric system could serve more than 133,000 commuters each day throughout the city’s east end.

The Dec. 15 announcements marks the start of the consultation process for the multibillion-dollar transit project.

CDPQ Infra said it will hold a range of meetings with communities and other stakeholders in the coming months, adding that it could present the new infrastructure project to the Bureau d’audiences publiques sur l’environnement (BAPE) for review as early as next year. If approved, detailed design and construction would follow.