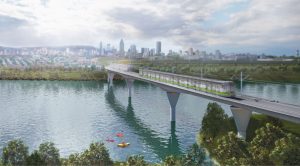 A project management office will be created for the project, in addition to a community relations office.

The Reseau Express Metropolitain (REM) project in Montreal, Que. has launched. It will be the largest public transportation network developed in the city in 50 years.

Construction is expected to begin in April 2018. Initial tests will be conducted at the end of 2020, and CDPQ Infra – infrastructure projects owner-operator – aims for REM to be operational in the summer of 2021.

Groupe NouvLR and Groupe des Partenaires pour la Mobilite des Montrealais (PMM) are the winning consortia for the project, which was announced two years ago.

Objectives for REM include a sustainable, high quality system with high frequency and quick travel times. The $0.72/passenger-kilometer cost target will be used by the city’s transportation authority to set rates.

The project also hopes to keep construction costs, which total $6.3 billion, at a variation of less than 5 per cent of preliminary estimates.

Construction of REM is expected to contribute to the provincial economy, creating about 34,000 local jobs.

Three shared-use, existing infrastructures – the Mont Royal tunnel, Central Station (rail infrastructure) and the Viaduc du Sud – have been or will be acquired and grouped in a subsidiary of CDPQ Infra.

This subsidiary intends to maintain these infrastructures shared with current and future operators and generate a stable commercial return.