$2.6B Edmonton LRT project has green light as province steps aboard 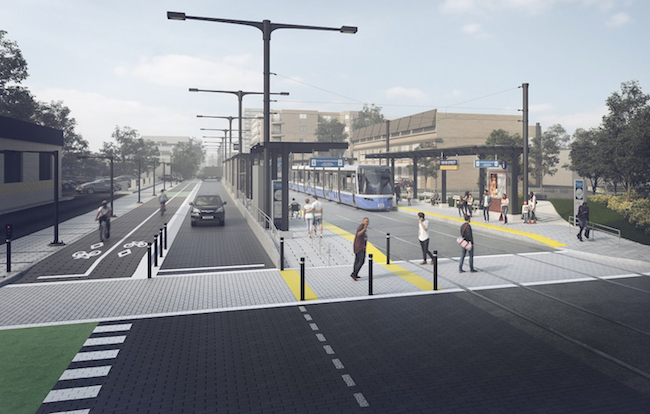 Once complete, the new line is expected to serve about 60,000 commuters each day. PHOTO: City of Edmonton

EDMONTON—Another major Alberta transit project is set to get off the ground.

Premier Rachel Notley committed $1 billion to Edmonton’s Valley Line West, which has been in the design stage for several years and city planner roadmaps for a decade.

The light rail project is expected to cost $2.6 billion overall and include 14 stops along 14 kilometres. Running from downtown to the west end, it will link up with the city’s existing LRT, as well as serve as an extension to its counterpart, the Valley Line Southeast, which has been under construction since 2016.

“We are planning and building a city for more than a million people, and with commute times getting longer each year, now is a critical time in Edmonton’s growth to ensure we have a robust transit network in place,” Edmonton Mayor, Don Iveson, said in a statement. “Today’s announcement by the province helps us get one step closer to that goal, and we look forward to continuing to work with them on these types of critical infrastructure investments.”

One of the two planned elevated stations. PHOTO: City of Edmonton

Among the construction highlights for the new light rail system are two elevated stations and a pair of new bridges that will leapfrog Stony Plain Road and Anthony Henday Drive. The new piece of transit infrastructure will include stops at the West Edmonton Mall, MacEwan University and the Misericordia Hospital, among others sites.

Procurement is expected to get underway next year. The city has not indicated what delivery method will be used for the project, but the southeast leg of the Valley Line is using the P3 model.

Once complete, the new line is expected to serve about 60,000 commuters each day and help to alleviate congestion on city streets. The province estimates the project will create 5,300 jobs through the construction, operation and maintenance phases.


1 Comment » for $2.6B Edmonton LRT project has green light as province steps aboard