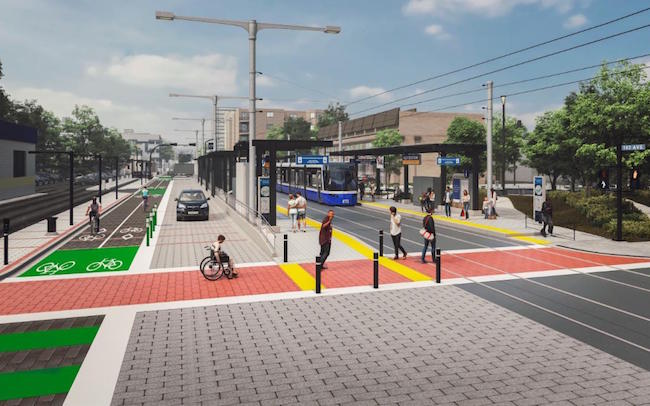 The 14-kilometre rail line will run predominantly with traffic at street level. PHOTO: City of Edmonton

Edmonton has picked a preferred proponent to take on the second half of its new Valley Line light rail transit project.

Discounting any possible issues that may arise during final contract negotiations, the city announced Oct. 30 it has selected the Marigold Infrastructure Partners consortium to design, build and partially finance the 14-kilometre Valley Line West. The team is made up of Colas Canada, Parsons Corp., Standard General Inc., Francl Architecture, Fast & Epp and Stantec Inc.

“We’d like to thank each of our proponent teams for participating in our procurement,” Brad Smid, director for the Valley Line, said in a release. “We’re confident our rigorous competitive process has culminated in the selection of a strong team to deliver the Valley Line West LRT at good value for Edmontonians.”

The 14-kilometre transit project is expected to cost $2.6 billion, with construction starting next year and continuing until 2026 or 2027. Running predominantly with traffic, the line includes 14 street-level stops, as well as two elevated stations. Among other engineering obstacles, the project will require two new bridges, one built over Groat Road and the other crossing Anthony Henday Drive.

The second component of the wider 27-kilometre Valley Line, the “West” segment will connect to the “Southeast” portion, which has been under construction since 2016. The TransEd build team, consisting of Bechtel Corp., EllisDon Corp., Bombardier, Inc. and Fengate Capital Management Ltd., is heading that project.

Naming Marigold as the preferred proponent ends a fairly rocky procurement period for the western portion of the project. Three teams were shortlisted for the LRT line in June 2019, but two subsequently withdrew from the process, forcing the city to re-evaluate its approach. It paused the project “to fully understand the changing market conditions and evaluate its options” and relaunched the tender process in November 2019.

The city and Marigold teams are expected to finalize the contract by the end of 2020, ahead of the start of construction next year.