The building blocks of autonomy: OEMs step up integration of automated features in their big iron 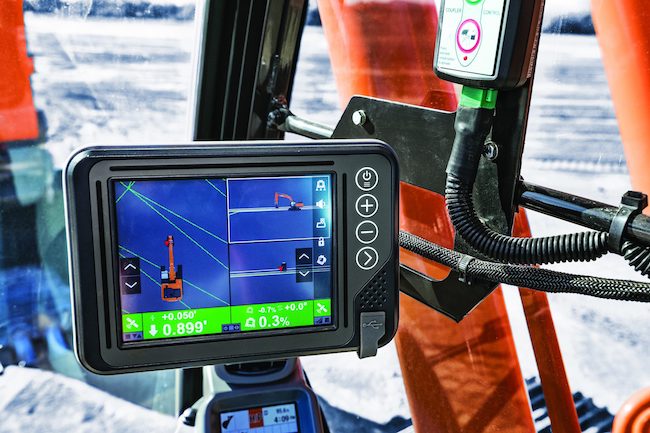 Automation at the bucket level is seen as one of the key milestones on the road to autonomy. PHOTO: Hitachi

The road to autonomous construction sites will be paved with incremental advances. Though a number of major manufacturers have already set up autonomous test sites devoid of conventional operators, experts anticipate the real-world shift to cab-less excavators, dozers, trucks and loaders will be a slow, but steady process.

Cat and a long list of other equipment manufacturers used Conexpo-Con/Agg 2020 as a launch pad for their latest innovations that improve productivity on job sites.

“As we make the machines better and better [and] machines get smarter and smarter, the ultimate manifestation of that productivity is going to be autonomy,” Rio says, likening the shift to the commercial vehicle industry where drivers are getting more and more technological perks, such as lane departure warnings and collision avoidance systems, with each model year.

STEPS ALONG THE WAY

In Las Vegas this March, Cat highlighted its remote control equipment operation technology, showing off the Cat Command system for loading, dozing and excavating, among many other innovations. 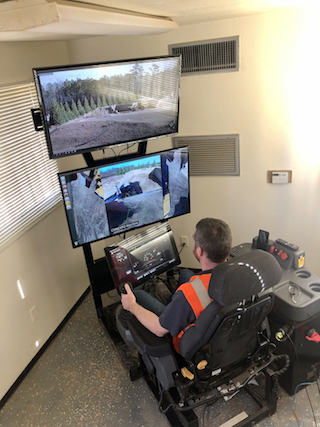 The technology gets operators out of the cab, but leaves them in control with either a line-of-sight remote or a “virtual cab.” The virtual cab option uses a series of cameras and sensors to let an operator sitting in a Command Station take control of a piece of equipment. The operators can be in an on-site trailer a few hundred yards from the equipment, or on the other side of the world.

At Conexpo, Cat let attendees take a seat in its virtual cabs and operate equipment located a number of sites across the U.S. — some more than 2,000 kilometres from where the operator was seated in Vegas. The stations themselves are multi-purpose, letting operators switch between running excavators, dozers and wheel loaders.

John Deere is piecing together the building blocks and moving down the trail to autonomous systems as well.

“We think of that path from automation to autonomy as a journey,” says Kevin Very, director of Technology and Product Marketing for John Deere’s Construction & Forestry division. Very pointed specifically to “robust” machine connectivity, grade control, other complementary automation features and improved situational awareness for operators as several of the stepping stones.

“For us, one of the pieces right in the middle of that is grade control and machine control, and how do we help control and augment the cutting edge of machines so it’s more productive, more precise with easier effort to get there,” Very says.
On excavators, Deere already offers integrated grade guidance systems. Later this year, it plans to build on this by releasing full 3D SmartGrade for excavators. Though Deere remains focused on the bucket level of its earthmovers at the moment, as operators become more comfortable with the new tools and automated systems keep advancing, the company’s engineers will integrate more and more assist features.

“Today, we still require an operator to push the buttons and make it go, but what you’ll see is with those levels of automation, the tasks become more automated and expanding out from that middle.”

WALK BEFORE YOU RUN

Much of the technology to automate equipment already exists. Often, it’s contractors or operators who need to catch up, or be willing to accept a technological helping hand.

Jonny Spendlove, the product marketing manager for Excavators with Hitachi Construction Machinery — Americas, says many operators are wary about the new systems, in part because they want to remain in control. With this sentiment in mind, Hitachi is easing its customers into the grade control space. 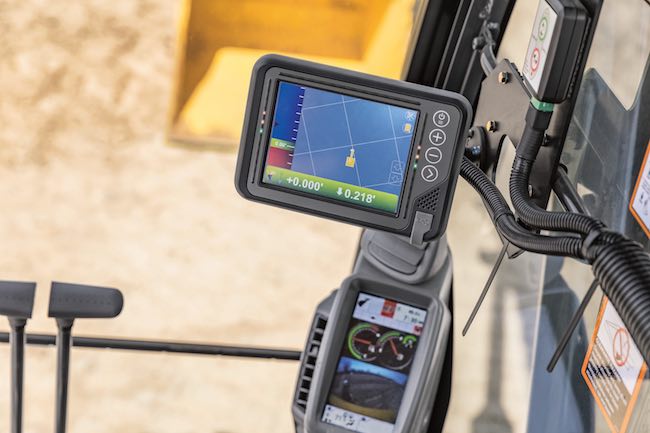 Once bucket movements have been automated, equipment makers will continue to integrate more and more automated features into their machines. PHOTO: Deere

At Conexpo, Hitachi introduced Solution Linkage Integrated Grade Control with Topcon on its ZX350LC-6 excavator. It plans to introduce the factory-integrated system to other excavators in its Dash-6 in the future. The option lets the machine control the boom and bucket, while the operator handles the arm.

The company is also leaving an upgrade path open for customers who want to test out the technology with guidance and then move to control in the future.

Progress toward full autonomy is steady, but there’s consensus among all industry players, that it remains a work in progress.

Doosan, for instance, is targeting 2025 to go to market with fully autonomous equipment it’s currently piloting at proving grounds in South Korea.

Known collectively as Concept X, the company unveiled a suite of technologies last November it expects to be autonomously moving dirt on the construction sites of the future. The goal of the project is to have the machines on autopilot, leaving workers to focus solely on management and analysis. Incorporating data from 3D drone surveys, Doosan plans to continue perfecting the movements — and decision-making abilities — of its unmanned excavators, wheel loaders and haul trucks over the next five years. 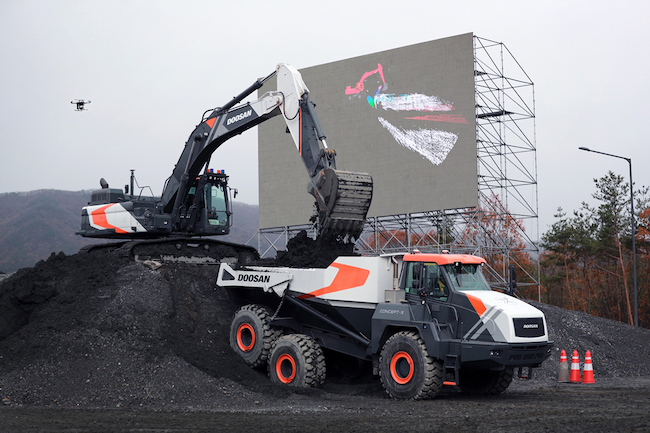 Doosan is testing autonomous systems and hopes to go to market with the technologies in 2025. PHOTO: Doosan

Along with enabling contractors to slowly shift operators into new roles, equipment makers are also extending their reach beyond the equipment itself by offering all-encompassing job site solutions.

Komatsu gave Conexpo attendees a sneak peek at an upcoming suite of Internet of Things-powered technologies it calls Smart Construction. Made up of 11 separate components — from design and remote monitoring tools, to drone data collection and cost tracking solutions — Komatsu plans to begin rolling out the technologies this year. In many of the areas, the company plans to leverage strategic partnerships with existing tech providers, similarly to how equipment makers have teamed up with the likes of Leica, Topcon and Trimble on machine control.

“With Smart Construction, software, hardware, and services come together to help customers be more connected, efficient, and successful,” Komatsu notes.

Indeed, the continued blurring of the line between physical assets such as equipment and the digital world, is a key milestone on the road to autonomy.

“Having customers have an awareness of a 3D model, real-time, on the job site, would be required to truly automate these capabilities because you have to know where you are in the space and what’s around you and that’s difficult to control for unless you’ve got a consistent real-time image,” Kevin Very says.

So far, the mining industry remains on the forefront of autonomous technology.

Caterpillar, for instance, as of this February, had 275 autonomous trucks operating at eight different mines around the world. While mining has been a first mover on autonomy, its remote, easily securable and relatively static sites simplify the transition.

Construction’s path to autonomy will likely be more arduous, but major manufacturers will continue assembling the pieces — regardless of whether the advances are obvious or take place in the background.
“It’s almost going to be like the frog in the hot water,” Fred Rio says. “We’re not going to realize that autonomy comes upon us until one day, we’ll look back and realize that it’s been there.”