Contractors have new ways to leverage data; the key is separating what matters from what doesn’t 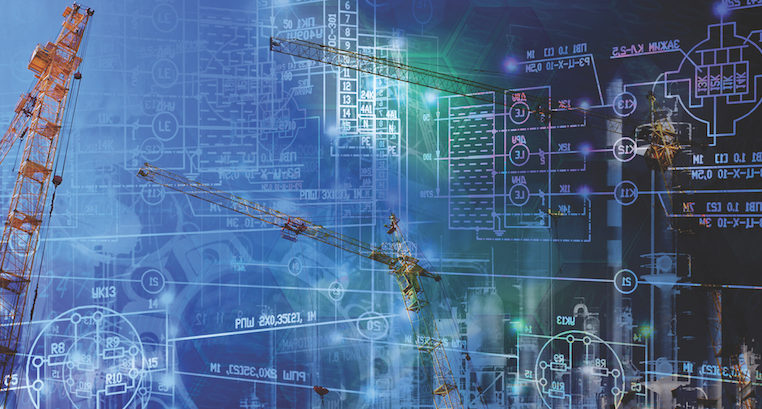 Telematics data is giving equipment owners and operators a clearer picture of how their machines run than ever before. PHOTO: Adobe Stock/Red150770

It’s almost impossible today to buy an appliance or a piece of machinery that isn’t collecting data. Construction equipment — dozers, excavators, cranes and haulers — is no exception. The catch is that having the data doesn’t necessarily mean being able to utilize it.

“Now there’s so much data coming off these machines that there’s a lot of opportunity there,” says Brett Roberts, Telematics manager at Doosan Infracore North America. “I think some customers do take great advantage of that and use the data to get insights into how to better their business and become more efficient. But most customers I think are a little intimidated by the data, and don’t really know how to attack it or how to use it.”

As OEMs continue to introduce more sensing and monitoring features on their machines, improvements in geo-systems, wi-fi, and cellular technologies are making it faster and easier to bring that data into centralized IT systems. However, unless adequate data management systems are in place, too much data can be as problematic as not enough.

“One of the biggest challenges I’ve heard from customers is the onslaught of data,” says Dave Adams, product sales manager for Connected Services at Volvo Construction Equipment. “Fault codes flood their phone or email. They’re often confusing and require additional research to understand. Even then, they may find it’s something that is not critical. This can lead them to ignore codes and miss something important and/or costly.”

“Once you use wireless and remote sensing technologies in construction, you will end up with huge amounts of data” says Osama Moselhi, a professor and the director of the Centre for innovation in Construction and Infrastructure Engineering and Management (CICIEM) at Concordia University. “The challenge is to mine this data and have it in an actionable format. You can make use of it in development of dashboards that assist project managers in making timely decisions.”

STARTING WITH THE BASICS

Historically, telematics in construction has developed in two phases. In the early days, it was all about tracking mobile assets — a particular concern for contractors with large fleets. Although the field has expanded significantly since those days, knowing where equipment is located is still the most common application of telematics.

“From a really basic sense, a lot of this is about knowing where your equipment is,” says Patrick Stephenson, business area director for Trimble. “A lot of the contractors are interested in when things go missing, where they are now, where they are supposed to be later — that’s the most basic thing that telematics can do right away. Contractors see almost an immediate return on investment with that.” 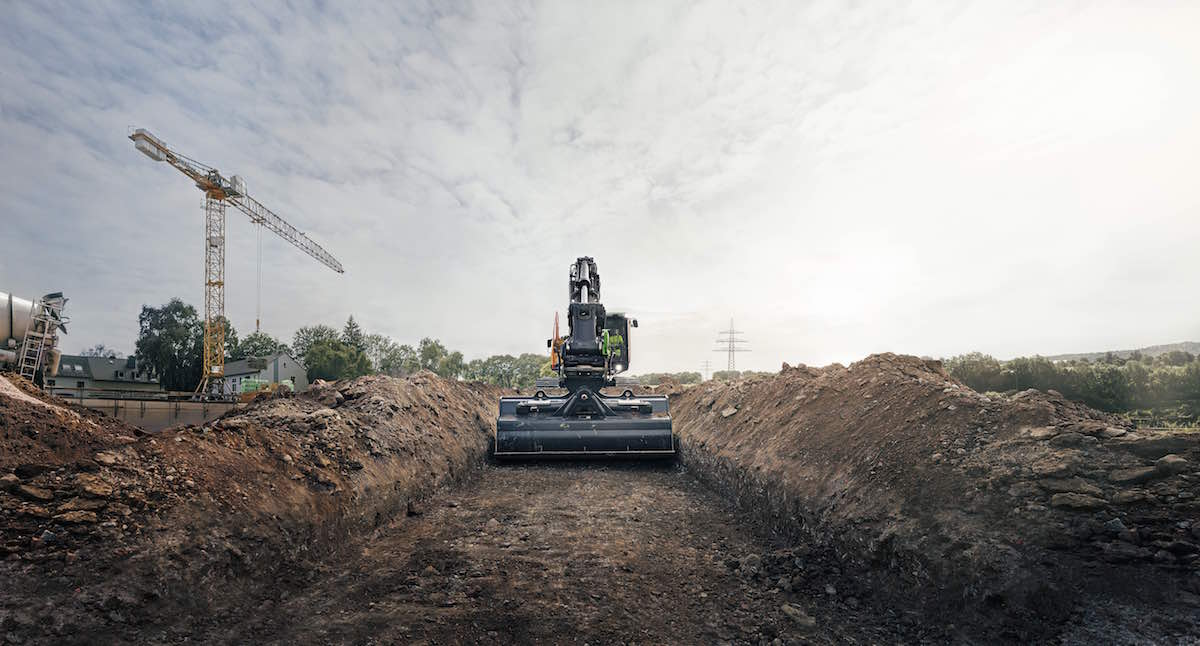 New equipment provides contractors with so much data, one of the big challenges is making use of it. PHOTO: Volvo

The second phase took off in 2008 when the Association of Equipment Management Professionals (AEMP) brought major construction equipment OEMs together to create the first telematics standard for the industry. The standard, released in 2010 as AEMP Telematics Data Standard V1.1, greatly expanded the scope of construction telematics by defining how data such as fuel consumption, location, operating hours and mode of operation is integrated into a central IT database. The standard has since been updated to reflect the many technological advances during the past decade.

This wider scope has opened the door to a host of ways in which telematics data can be leveraged to improve efficiency and profitability.

“Telematics allow contractors and operators to utilize their machines in the most efficient and profitable way,” Adams says. “They can monitor service intervals — helping avoid downtime — and catch trends that indicate opportunities for improvement. The data they generate can support more accurate project bidding, staying on budget, and making fleet managers’ lives easier by translating the codes they are otherwise flooded with. The point of telematics is to simplify the operation and maintenance of your machine, helping maximize your cost of ownership.”

For contractors who aren’t sure where to start, reducing idle time is one of the best opportunities for a quick return on investment. “Idle time is one of the biggest areas we work on,” Roberts says. “It affects fuel, warranty, maintenance, and wear of parts on the machine, and it’s something you can easily change.”

Roberts notes he has seen customers cut down their idle time by 30 per cent.

Telematics software allows contractors to look at idle time and other indicators in the context of how the equipment is being operated. “With telematics, people are able to go in and actually see how much working time is on the machine versus idle time, and how much fuel is being burned in each power mode, for instance,” Roberts says. “And I can actually start to analyze and have conversations with operators about how to be more efficient.”

Idle time might also be a symptom of workflow issues on the site. For example, if the workload is improperly balanced between different pieces of equipment, data gathered through telematics can help improve the work process so that utilization is consistent across different lines of equipment.

“We look at queue times, where a piece of equipment is in the same place for too long,” Stephenson says. “That could be the result of having too many haulers in a load and haul scenario. If you have too many haulers, they’re going to be waiting for the one in front of them to get loaded.”

Telematics can also help improve load balancing over multiple job sites. For example, if a large excavator is being used only two hours a day on a job site, it might be more efficient for the company if this machine is relocated to another job site that has been employing three smaller excavators.

Ensuring that equipment is being utilized in the correct power mode is another issue. For example, telematics data might reveal a machine has spent a great deal of time doing lift work while in digging mode. This might indicate the machine and operator are not working as productively as they should be. 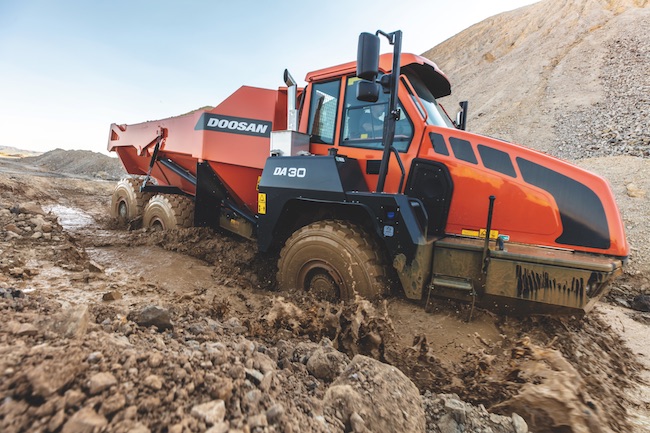 Sensors can keep both operators and office staff apprised of equipment status in real-time. PHOTO: Doosan

Telematics creates the opportunity for fact-based discussions with operators, who can be shown the data and provided with coaching in order to improve performance. “Telematics can also help identify machine misuse and provide opportunities for operator training,” Adams says. “For example, with the right telematics system, a fleet manager could see that a certain machine has a high number of hot turbo shutdowns. They can then work with the operator(s) of that machine to address the issue.”

Alarms and alerts also play a major role here, and this has been one of the big advantages of telematics. “Reports and alerts from a quality telematics system can also help keep jobs on budget by identifying issues quickly, prioritizing them, and suggesting actions to be taken,” Adams says. “This avoids unplanned downtime and lost hours.”

Perhaps the most appropriate and important application for alerts, however, is ensuring that workers are kept safe. Telematics can alert a manager or safety officer if a truck driver is on the highway without a seatbelt, if a machine has been running too hot for too long, or if it has entered an area where there is blasting going on.

As the automotive industry continues to introduce features that move vehicles closer to fully autonomous operation, similar innovations are being applied to construction equipment, and this could lead to huge advantages. Smart control technology combined with 3D vision capabilities, for example, could enable multiple pieces of equipment to work interactively to create the most efficient outcome.

“You could have a war zone-like centre for deployment and monitoring equipment fleets that interacts to avoid collisions and improve productivity” Moselhi says.

However, given the unstructured nature of construction sites, this will not happen as rapidly as some believe. “Getting to autonomy is probably be a longer journey than in automotive because of the complexity,” Stephenson says.

According to Stephenson, companies need to look at both ends of the spectrum — take advantage of the immediate wins that result from the technology, as well as keep an eye on the future.

In the near term, contractors can expect improvements in software that allow them to take advantage of the data they already have. Equipment OEMs such as Doosan and Volvo CE offer hosted software solutions that allow them to take a more active role in helping contractors manage their equipment. Dealers, for example, can receive alerts that a piece of equipment needs attention.

On March 10, Trimble announced Trimble WorksOS, a hosted software platform that helps contractors integrate telematics data across vendor lines, so that they can compare equipment from different OEMs as well as equipment in different classes.
In the longer term, telematics will become one element of a digitally transformed construction industry, where equipment, materials and employees are connected.

“The idea is connecting everything — allowing you to manage everything on your jobsite,” Stephenson says. “That’s our ultimate goal — the idea of 100 per cent connectivity is really where you start to see productivity gains on the job site.”