2017 pickup truck models get everything from a mild refresh, to a complete makeover

With trucks as popular as they are, automakers can’t afford to stand still. Several models undergo everything from a mild refresh to a complete makeover for 2017. 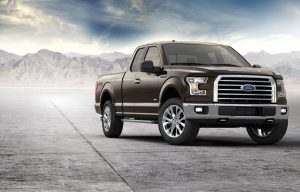 Ford puts a new engine and transmission in its F-150, unveils an all-new Super Duty, and reintroduces its high-performance Raptor.

A new 10-speed automatic is added to some models, in addition to a six-speed transmission. Depending on the model, maximum towing capacity is 12,200 lbs.

Like the F-150, the all-new Super Duty gains an aluminum body underpinned by a high-strength steel frame. Choices are Regular Cab, SuperCab and Crew Cab, with two wheelbases and box lengths.

The Raptor returns with a high-output 3.5-litre EcoBoost engine that’s more powerful than the V8 it replaces, with 510 lb.-ft. of torque, along with a 10-speed transmission and new 4WD system that can be dialled in for specific driving conditions. 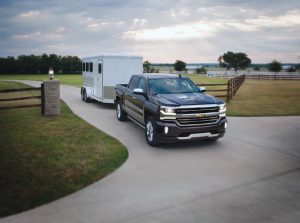 General Motors makes a few changes to its Chevrolet Silverado and GMC Sierra, including a new 6.6-litre V8 Duramax diesel engine in its heavy-duty models.

On the 1500 models, capless fuel fill is standard, and low-speed emergency braking is added to the optional driver alert package. Maximum towing on the 1500 Crew Cab rises by 500 lbs. to 12,500 lbs., matching the Double Cab’s maximum rating.

The Silverado and Sierra 1500 models come in Regular, Double, and Crew Cab, in 2WD or 4WD, and with three available box lengths. Engine choices are a 4.3-litre V6, 5.3-litre V8, or 6.2-litre V8, all of which switch to four-cylinder operation under light load for improved fuel economy. A six- or eight-speed automatic is available depending on engine.

A limited number of 5.3-litre models are available with eAssist, a mild hybrid system that adds gasoline-free power on acceleration and keeps the engine in fuel-saving mode longer. The battery charges through regenerative braking and doesn’t require plugging in.

Although the Silverado and Sierra are mechanical twins, they differ slightly in their trim levels. The Silverado 1500 comes in six trims, including a base Work Truck trim on all cabs and configurations, and rising to the High Country 4WD Crew Cab. The Sierra comes in four trims, topped by the luxury Denali. 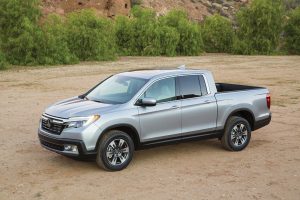 Although not designed as a work truck, Honda’s Ridgeline may fit the bill for lighter-duty needs. It’s redesigned for 2017 with a more truck-like appearance and new driveline.

It uses a 3.5-litre V6 engine making 280 hp and 262 lb.-ft. of torque. The engine automatically switches to three cylinders under light load, and combined city/highway fuel economy is 11.3 L/100 km.

Unlike other trucks, the SUV-based Ridgeline uses an all-wheel-drive system that’s primarily front-wheel biased and sends power to the rear wheels as needed. Maximum towing is 5,000 lbs., while payload tops out at 1,570 lbs.

The unique dual-action tailgate drops down conventionally, or can be opened sideways like a door for easier load access. The bed is made of a non-corroding composite material and includes a locking trunk under the box, with drain plugs for washing it out or using it as a cooler.

The interior also features considerable storage space, and the folding rear seats are on metal legs so items can be stored under them while passengers are seated. Those who only need a lighter-duty truck and are looking at options such as the Chevrolet Colorado, GMC Canyon, Nissan Frontier or Toyota Tacoma might want to consider the Ridgeline as well. 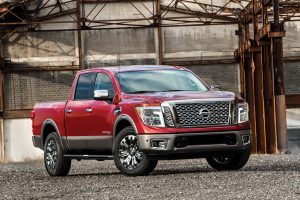 CHICAGO (Feb. 11, 2016) ñ Nissan TITAN will be available in 4×2 or 4×4 drive configurations with three cabin configurations ñ Crew Cab, King Cab and Single cab ñ and three bed lengths ñ 5.5, 6.5 and 8 feet. Similar to TITAN XD, TITAN will be available in five trim levels ñ S, SV, PRO-4X, SL and Platinum Reserve. The TITAN will be powered by Nissanís 5.6-liter EnduranceÆ V8 gasoline engine capable of 390 horsepower and 401 lb.-ft. of torque. This engine will be mated to a 7-speed automatic transmission. A V6 gasoline engine will also be available (details to be announced at a later date).

In 2016, Nissan introduced its large Titan XD, intended to span the gap between half- and three-quarter-ton trucks. For 2017, the company adds the Titan Crew Cab V8 half-ton. Single cab and King Cab models will be added later, along with a V6 engine.

For 2017, Nissan adds a new factory warranty that covers all trucks bumper-to-bumper for five years/160,000 km.

Available in 2WD or 4WD, the Titan half-ton tops out at a maximum 9,390-lb. towing capacity. It comes in five trim levels, all of which include a 5-ft.-5-in. bed, locking tailgate, folding 60/40 rear seats, and mobile phone app integration. Waterproof, locking in-bed storage boxes are available.

The XD’s towing capacity reaches a maximum of 12,038 lbs., which may seem like a head-scratcher given that some competitors’ half-tons are rated for more. The key is in how easily it handles heavy loads. Those who pull consistently at half-ton full capacity, but who don’t want to move up to heavy-duty, should give it consideration. 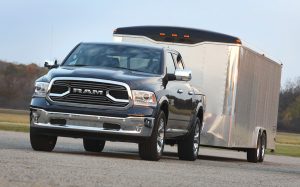 Ram remains the only half-ton pickup available with a diesel engine, although buyers now have a second choice with Nissan’s slightly larger Titan XD. The 2017 Ram carries over with only minor changes, including a new cabin air filter, and automatic climate control added to more models.

The Ram 1500 is available in Regular Cab, Quad Cab, and Crew Cab, while the 2500 and 3500 come in Regular, Crew, or the oversized Mega Cab. Two bed lengths are offered.

The 1500 offers an optional four-corner air suspension, which can be lowered for accessibility or raised for rough terrain, but its weight affects the maximum payload. Ram’s available RamBox bed-side storage system provides locking storage for tools and other items. 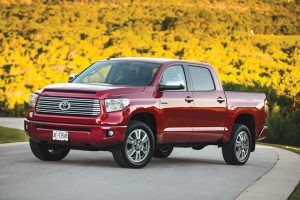 The Tundra comes only as a half-ton, in Regular, Double Cab or CrewMax configuration, with three bed lengths depending on the cab or trim, and in 2WD or 4WD.

All models come standard with a backup camera, front tow hooks, manual headlight levelling system and phone connectivity. Trucks equipped with the 5.7-litre include a heavy-duty tow hitch receiver. Towing capacity goes as high as 10,196 lbs. in 4×4, and up to 10,500 lbs. for 4×2 trucks, while payload reaches 1,770 lbs.

Numerous options and packages are available for the Tundra, including blind spot monitoring, a power-sliding rear window that completely opens vertically like a door window, factory spray-in bedliner, and the luxury 1794 Edition.

The Tundra TRD Pro, available in Double or CrewMax configurations, uses the 5.7-litre V8 and has a towing capacity of 9,800 lbs. It includes a factory-installed trailer brake controller, 4- and 7-pin connectors, transmission cooler, and heavy-duty hitch receiver, along with an off-road suspension kit, skid plate, dual exhaust, and TRD-themed styling cues.