Ontario Technological Skills Competition to move to Toronto for 2017 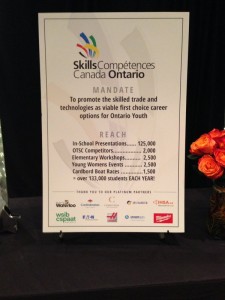 The Ontario Technological Skills Competition (OTSC) is the largest skilled trades and technology competition in Canada, and Skills Ontario announced today that the event will be moving to the Toronto Congress Centre in 2017. The announcement was made at the Toronto Congress Centre this morning by Skills Ontario executive director, Gail Smyth. Toronto Deputy Mayor, Vincent Crisanti, was also present and provided remarks on the significance of the OTSC’s move to Toronto in 2017.

“Skills Ontario is an essential organization that for the last 27 years has encouraged our youth to learn about and pursue exciting careers in the trade and technology sectors, while growing a competitive and skilled workforce in Ontario,” said Crisanti. “Having experienced firsthand a Skills Competition, I am excited that this event will be taking place in North Etobicoke, at the Toronto Congress Centre in 2017.”

The competition, currently hosted at RIM Park in Waterloo, features 67 contest sites, 44 elementary challenges and workshops, a career exploration showcase, 2,200 competitors from across Ontario and over 20,000 spectators — a number that continues to grow each year.

The OTSC moved to the Kitchener Auditorium in 1997, after several years in Hamilton. In 2002, the OTSC moved to RIM Park in Waterloo, where it has seen growth in the number of contests, participants, and visitors year-over-year. Mark your calendars for May 1-3, 2017 and join us for the 2017 OTSC at the Toronto Congress Centre!