Canada is a laggard on construction permitting. An Ontario initiative aims to change that 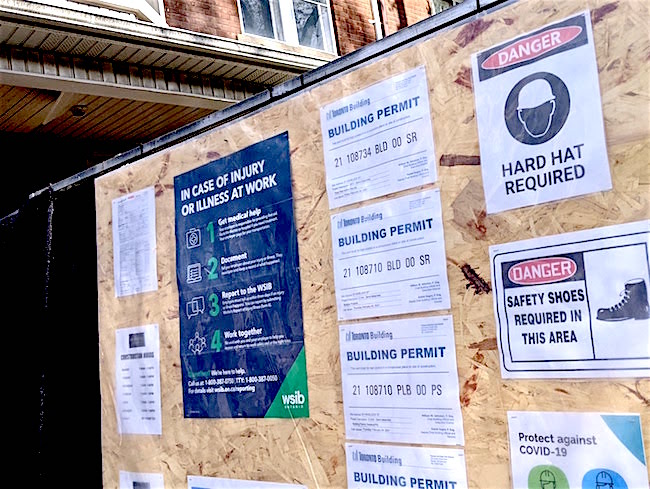 Building permits outside a residential renovation project in Toronto. Advocates say digitization could streamline the permitting process in Ontario and beyond

Over the past year, curbside pickup has proven to be one of the keys to keeping the economy moving, and some building departments have adopted it for drawings and other approval documents. While helpful, the practice is a reminder of how far behind Canada is in digitizing its permitting processes.

“While some may consider curbside pickup innovative, the reality is those drawings could be digital and tracked through the internet,” says Arash Shahi, CEO of AECO Innovation Lab.

According to a World Bank survey, Canada ranks 64th out of 190 nations in ease of obtaining construction permits, reflecting a lack of e-permitting sophistication. “Canada is the only G7 country with out a national BIM mandate,” Shahi says.

AECO is spearheading One Ontario, an initiative to establish a common data platform for all construction project approvals in the province, which many hope will set the stage for standardization across Canada. The initiative would streamline permitting processes and eliminate the need to make separate submissions to environmental, transportation, and other authorities.

“There would be a single and consistent method of application for development approvals,” Shahi says. “So you’d go to one portal, regardless of what municipality you’re building in.”

A GROWING SENSE OF URGENCY

Canada’s permitting crisis is particularly problematic for home builders, who often have to tie up capital for years as they await various approvals, often completely in the dark about what the objections are, or when approval will be granted.

“There are, in our estimation, 45 different government bodies that are involved in that approval process at one stage or another,” says RESCON President Richard Lyall. “So if you have areas where standards aren’t enforced or there are no standards at all, then in terms of accountability, transparency and predictability, you’ve got a problem.”

While the impact of e-permitting on OGCA members who engage primarily in institutional, commercial, and industrial (ICI) projects is not as dramatic — GCs tend to enter the picture after the permitting process — the organization is keeping a close eye on One Ontario’s progress. “We are watching the implementation of One Ontario closely to see the impact on project approvals and working with our colleagues at RESCON and other design-build organizations,” says Erich Schmidt, Government and Stakeholder Relations Associate at the OGCA.

A key interest at the OGCA is that any push for standardization maintains a level playing field for all GCs. “Once some form of e-permitting is established and there are proven test cases, the industry might push to adopt a BIM standard,” Schmidt says. “The OGCA is standard agnostic — our big concern is ensuring our small and medium-sized members can competitively bid in all of Ontario’s municipalities.”

While stakeholder organizations have pledged sweat equity, the initiative is currently unfunded. The approximately $2 million needed to get the project rolling, however, is relatively small, Shahi notes, because much of the technical work has already been done in other countries, notably Singapore and the U.K.

“The good news is that everybody else has done this, and we can learn from them and adapt that according to what we want to do,” Shahi says. “So there’s not a lot of risk.”

The bulk of the work, consequently, will be about getting approvals entities on the same page. “It’s more about research than the technical piece,” says Ralph Kaminski, director and chief building official for the Town of Oakville and member of AECO’s board of experts. “It’s ‘who has this information, where do they store it, and would they be willing to store it in a common location so that everyone can access the information?’ If we can agree to do that, can it also be agreed to use a standard terminology in order to find a simple solution to access all relevant data?”

The initiative will take years, but the payoff could be significant for Canada. There’s evidence, for example, that solving this problem will not only help the industry, but could help alleviate housing shortages in cities such as Toronto and Vancouver.

“We know that in other jurisdictions like Finland where they’ve introduced systems like this, it’s actually caused more projects to come forward.” Lyall says, “because the fact is, when you can predict your return on investment and when you will be able to actually get a project approved and build something, that encourages more projects to come forward.”

“The critical mass has been created,” Shahi says, “but we need the voice of the industry. We need people to stand up to the microphone and say ‘yes’ to this.”