Bird’s eye view: The consequences of falls from heights demand a culture shift 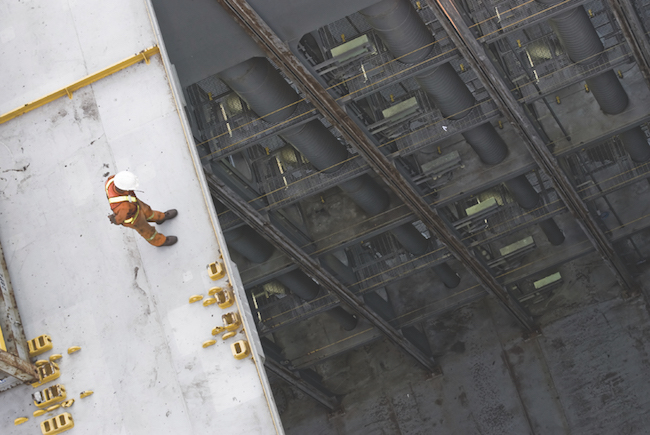 It may be time to rethink working at heights from the ground up.

Though some provinces have welcomed a marginal decline in accidents, falls remain a leading cause of injury for tradespeople of all stripes across the country.
The most recent data from workers compensation boards tally the unfavourable numbers for 2017. In Saskatchewan and Ontario, for example, falls were the third leading cause of injury for the trades. For Alberta and Newfoundland and Labrador, the outlook is even gloomier, with falls taking the top spot.

According to WorkSafeBC, falls were the third most common cause of injury for the province’s construction sector between 2013 and 2017, but represented the most significant claim cost, totalling more than $260 million.

Injured construction workers hoping to get back on the job face a unique set of barriers, typically staying on the bench for long periods of time — or not returning to work at all, according to Chris McLeod, co-director of the University of British Columbia and WorkSafeBC Partnership for Work, Health and Safety.

McLeod has undertaken a two-year research project on return-to-work outcomes for the sector in Alberta, B.C., Manitoba and Ontario, with the goal of understanding the little-researched challenges injured construction workers face, and uncovering potential solutions.

“If you have a highly skilled worker who’s injured, and you’re a small- or medium-sized employer, it can have a massive effect on your ability to meet the terms of your contract,” McLeod says. “What that brings into focus is not only the focus on return to work but also the focus on prevention.”

For an industry facing increasingly demanding expectations and a serious labour crunch, fall prevention will be essential to keeping workers on the job — and keeping businesses afloat.

Laying the foundations for a safety-first culture on-site needs to happen before shovels get in the ground, advises Scott Duncan, director of Health and Safety at National contractor Chandos Construction.

“How you start a job is going to dictate the next year or however long the job runs,” he says. “I want safe operation. Not operation and safety.”

Top management isn’t typically in charge of day-to-day enforcement, however. That responsibility falls to on-site supervisors. Even in a single jurisdiction, under a single company, the buy-in can vary drastically.

“I was facilitating a presentation to a group of senior leaders,” Duncan recounts. “I said, ‘Each of you insist our sites are all equal. You all have children of working age.’ I looked at one VP and said, ‘Which site would you put your son on today?’ He had to stop and think about it.”

For Duncan, the key to success falls on site supervision.

Safety standards can quickly get shelved in favour of accelerated timelines or reduced costs. Old-school thinking can influence younger workers who are encouraged to take risks in a misguided effort to impress the experienced boss.

The duty doesn’t end there. A faulty ability to assess risk should be clocked by supervisors. They should also be watching for untrained workers improperly using fall arrest systems, ladders, scissor lifts or other equipment.

Businesses and supervisors that fail to meet those general duty requirements could be handed a hefty fine, according to Roger Tickner, president of Richmond Hill, Ont.-based safety consultancy Tickner & Associates.

“It’s not enough and if somebody’s been injured and you’re not taking the necessary precautions, nowadays [corporations] can pay a million for the fine,” he says. “So, a supervisor could face charges of up to $100,000 per count if they’re making incorrect calls or turning a blind eye to safety.” 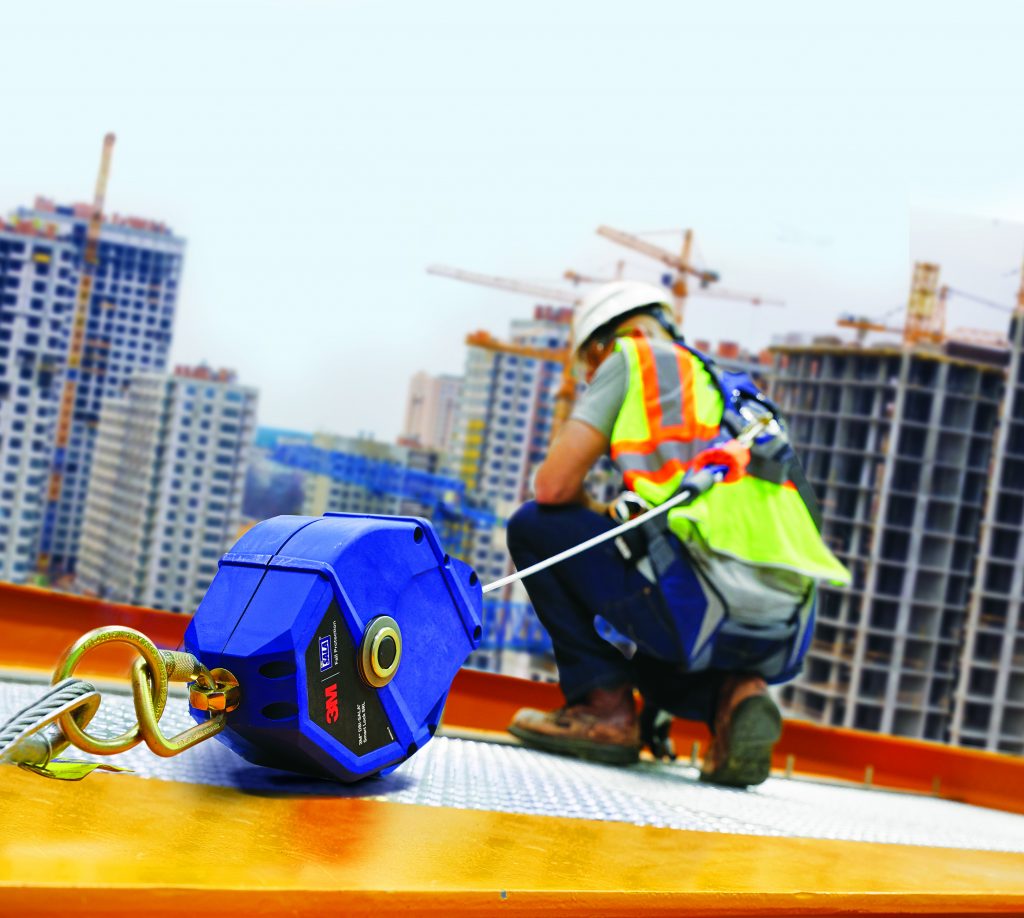 “You’ll get a top tier sub trade bid the job. They get the job, but then they sub it to a sub who subs it to another sub,” Duncan says. “In some cases, this waters down the quality of the safety performance… If we don’t manage that, we’re fighting an uphill battle.”

“The subs, of course, supervise a lot of the workers that might be working from heights” he says. “Whenever you contract out work, you can’t contract out responsibility.”

Safety gear has come a long way since the days of harness-free lunch breaks atop the Rockefeller Center.

Most notably, he says the move from lanyards to personal self-retracting lifelines, or SRLs, represents a significant shift over the past number of years.

“The technology’s gotten better to where we’re now able to do leading edge [work], to do tie off at your feet or below the D-ring,” he says. “Just in the last two to three years this has really become popular, and a requirement, in the personal SRL segment.”

3M upgraded its harnesses, too, to improve the compatibility of SRLs and harnesses, and to alleviate the weight of wearing SRLs. The company’s Smart Lock LE SRLs, designed to prevent unintentional lockups, take the gear one step further.

Other providers, such as Oakville, Ont.-based Vertemax, have also taken fall protection to new heights.

“We’re trying to implement fall arrest systems, we’re trying to implement edge protection systems, we got also catchfan nets around the building so in-case something happens, in-case any single piece or any single person falls from height, you will be catched and we will be able to avoid any kind of problem,” Jesus Munoz, the company’s Canadian managing director, says.

With customers such as PCL Construction, EllisDon and Ledcor Group, Vertemax is plotting to expand its product line and currently developing a self-contained building system to keep workers safe on high-rise construction projects.

Increasingly, manufacturers are also hoping to provide solutions that meet the unique needs of mechanical and electrical trades working at heights, whether from the third rung of a stepladder or the 30th storey of a building.

3M offers a variety of anchors to address those needs, such as doorjamb anchors, which are of particular benefit to mechanical contractors, Fuke says. 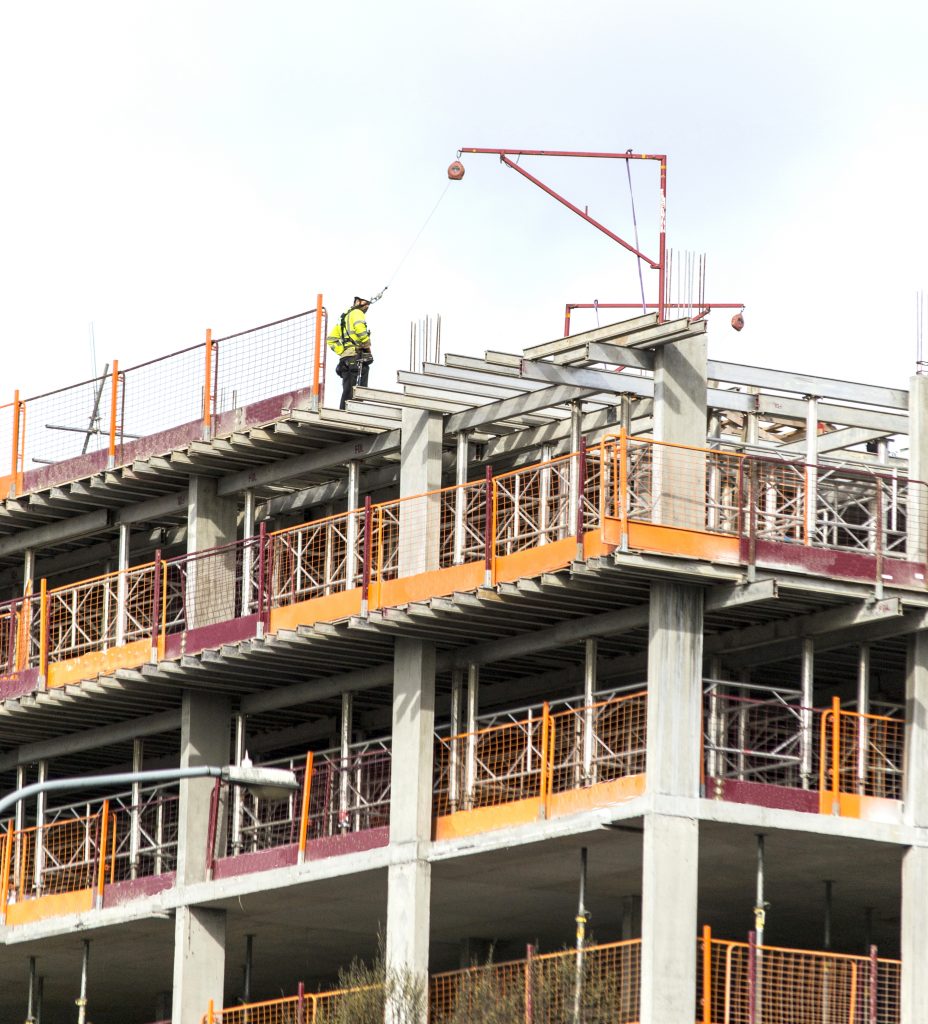 Designed for decking operation, the Vertemax Alsipercha system covers an area of 125 metres squared, allowing the worker to move within a radius of 6.5 metres around the column (Photo: Vertemax)

Overhead fall arrest systems are ideal for mechanical and electrical contractors, according to Munoz, since the work is typically in confined spaces.

Electrical contractors generally face the same issues as industrial workers at heights, Fuke says. Though, the equipment should be able to withstand high voltages.

“We have a variety of products that work through or are tested to arc flash so that they have the capacity or the propensity to withstand a 40 cal/cm2 hit and still allow the person to survive in a fall,” he adds.

Using the right equipment is just one piece of the equation, though. Improper use can lead to serious injury or, worse, a fatality.

Neglecting to store and care for gear properly is a common mistake, Fuke says, in addition to failing to tie off or perform a clearance calculation when wearing an SRL.

“Another scary one is that people wear harnesses extremely loosely,” he says. “You have a tendency when you fall in that scenario to squeeze through the harness if you’re falling headfirst. If you’re not falling headfirst, then it’s going to be so loose that once it tightens up there are a variety of different other situations that you get into, like the harness chest strap making contact beneath the user’s chin on impact.”

For Fuke, the most common — and potentially dangerous — oversight is an effective rescue plan.

“Everybody thinks that if they fall, they’re okay,” he says. “Well, if you’ve fallen and you’re hanging around for a long period of time, you could be in just as much trouble as you were before you fell because there’s a problem with orthostatic intolerance.”

Over time, he says, blood can pool in the legs, slowing down the flow to the upper body. The worker can grey out and pass out, eventually starving the brain of oxygen.
Job sites should not only develop a rescue strategy but also practice it, he adds.

Using tools such as suspension trauma straps are also important, which Fuke says could prolong the rescue period for a short period of time.

“Rescue is the most overlooked topic with respect to fall arrest and fall protection. Even though the provinces mandate it in most of the regulations, people overlook it,” Fuke says. 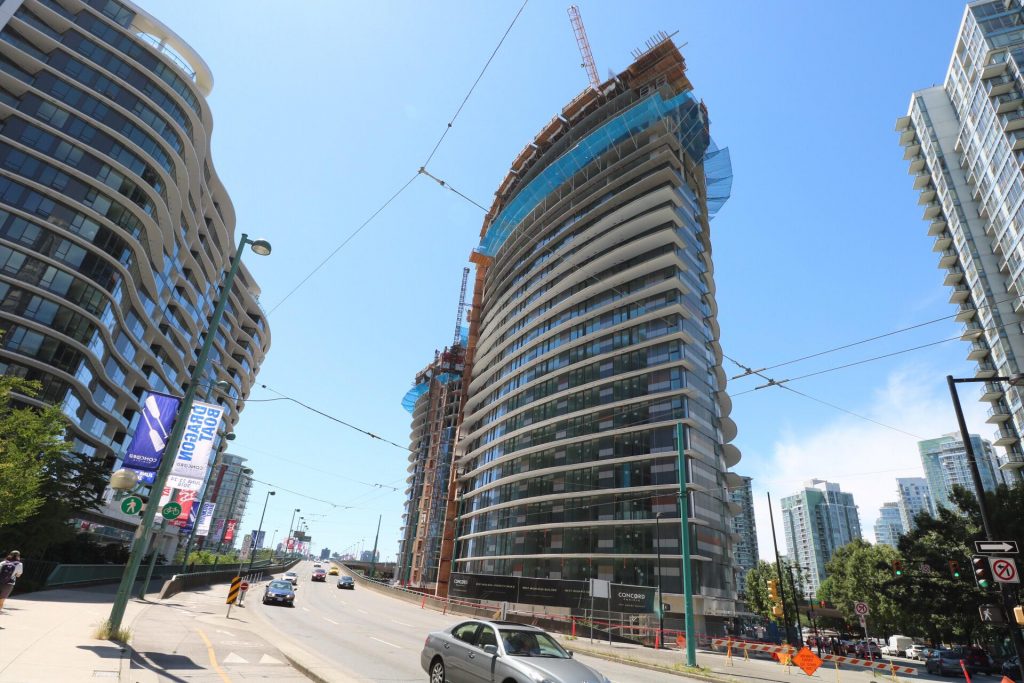 Despite a tick downward in some jurisdictions, fall statistics across the country paint a less than ideal picture of the dangers workers face at any height.

Paperwork and safety committees imposed on the construction industry by regulators aim to fix the problem. In practice, they fail to account for the dynamic environment of a job site, Duncan says, adding that the issue demands a fresh approach.

“You have to look at things totally different,” he says. “I think we’ve generalized safety to a point where we’re not providing the right information and equipment to the workers.”
Enforcement on-site will continue to play a crucial role in keeping workers safe at heights, along with proper equipment use.

A shift in culture across job sites presents a bigger challenge — though the pay-off, both the livelihood of workers and the bottom line of construction businesses, could prove substantial.