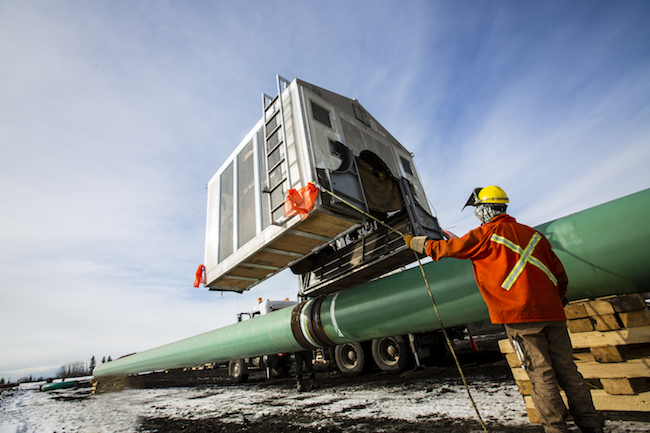 Among other projects, work on the Trans Mountain pipeline is advancing. It will greatly expand export capacity once it comes into service. PHOTO: Trans Mountain

CALGARY—The sombre mood that has gripped the Calgary-based oilpatch for several years is starting to show flickers of hope, with more financially secure companies making moves to grow in 2021.

Roszell heads a team of executives who have created, built and sold three Calgary-based conventional oil and gas companies in the past dozen or so years. All had water-themed names: Raging River Exploration, Wild Stream Exploration and Wild River Resources.

Early this year, just before the pandemic struck, the team took over management of a junior company called Corridor Resources Inc., changed its name to Headwater Exploration and raised $50 million in equity to add to its working capital balance of about $65 million.

It plans to have four drilling rigs working those lands in January with a 2021 budget of $85 million to $90 million and a goal of more than doubling the current 2,800 barrels per day of medium oil production.

“Without the pandemic happening, which made a lot of companies re-evaluate their assets, I don’t think this deal would have been available,” Roszell said, noting Cenovus’s decision to slash operating costs and concentrate spending on its core operations as oil prices fell amid the pandemic lockdowns.

As 2021 dawns, the oilpatch is waiting to see if U.S. president-elect Joe Biden will carry through with his campaign vow to kill the Keystone XL pipeline designed to take Alberta oil to the U.S. Gulf Coast refining complex. It’s also waiting to get the details on a new clean fuel standard in Canada expected to decrease the carbon content of transport fuels.

Meanwhile, the energy index which tracks the value of the best oil and gas companies on the Toronto Stock Exchange has fallen by about two-thirds over the past five years. And Calgary’s downtown office vacancy rate — stalled at over 25 per cent — stands to worsen due to layoff plans by Cenovus and Suncor Energy Inc.

On the other hand, work has started on the Minnesota portion of the Enbridge Inc. Line 3 replacement pipeline after six years of regulatory delays, potentially adding about 370,000 barrels per day of export capacity beginning next fall. Construction is also advancing on the Trans Mountain pipeline expansion from the Edmonton area to the West Coast, expected to triple existing capacity to about 890,000 bpd by the end of 2022.

The end of the program was cited by major oilsands producer Canadian Natural Resources Ltd. in recently signalling a five per cent production increase on higher spending in 2021 — analysts say the company is among those most likely to benefit from the completion of Line 3.

“I’m optimistic with regards to the recovery for the Canadian energy sector, with a dose of cautiousness thrown in,” said Grant Fagerheim, CEO of Whitecap Resources Ltd., in an interview.

Oil producers can make money from existing wells at current benchmark West Texas Intermediate prices of about US$45 per barrel, Fagerheim said, but it takes prices of $50 to $60 to make it worthwhile to spend money on exploration and development for new wells.

Analysts with RBC and Goldman Sachs expect average daily crude oil production in Western Canada in 2021 to regain almost all of the volumes lost because of the pandemic in 2020 as rising prices set the stage for future production growth.

“Capital spending … is expected to remain relatively flat in 2021, while consensus estimates show marginal production growth for the sector,” he said in a recent note to investors.