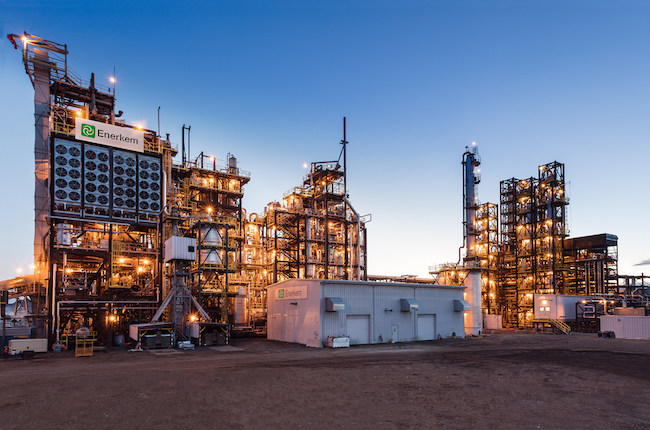 MONTREAL—Quebec and federal officials announced an investment Dec. 8 in a biofuel production facility that will use non-recyclable residual materials, diverting those items from landfills while reducing greenhouse gases in the province.

The Varennes Carbon Recyling project using technology developed by Enerkem is valued at $875 million, including $687 million to construct the plant in Varennes, Que., southeast of Montreal.

Enerkem said the plant will produce 125,000 litres of biofuel and renewable chemicals made from nearly 200,000 tonnes of non-recyclable residual materials and wood waste.

“Basically, we’re taking non-recyclable feedstock or things that you wouldn’t put in your recycling bin that (end up) in the landfill,” said Dominque Boies, CEO of Enerkem.

“The idea is to use this material, which would create methane emissions . . . and convert them into biofuels you can put in your car and obtain a carbon reduction.”

The company said the greenhouse gas reduction achieved by the plant will be equivalent to taking close to 50,000 cars off the roads and will help the Quebec government reach its new goal of reducing emissions by 37.5 per cent over 1990 levels by 2030.

In addition to the biofuels plant, the project includes the installation of an 88-megawatt electrolyzer for the production of green hydrogen and oxygen for the new plant, with Hydro-Quebec investing more than $190 million into the project.

Quebec will provide $160 million for the project with Ottawa kicking in $74 million.

Infrastructure Minister Catherine McKenna, among a trio of federal ministers who took part in Tuesday’s announcement, recounted seeing the technology up close at Enerkem’s facility in Edmonton.

“I’ve had a chance . . . to see the made-in-Quebec technology of Enerkem, turning waste into energy, getting rid of waste going to landfills, helping tackle the plastic pollution crisis,” McKenna said.

“But also creating good jobs, because we need good jobs more than ever, we’re in a health crisis, but we’re also very much in an economic crisis.”

The project also includes strategic private partners Shell, Suncor and Proman, which would use the biofuel into their products.

Pierre Fitzgibbon, the province’s economy minister, said Quebec’s investment will include an $80 million loan through Investissement Quebec and $80 million in shares.

Fitzgibbon said investing in the Montreal-based company involved a certain level of risk in an emerging green technology. “As a government, we must be there to encourage green innovation even when it is risky,” Fitzgibbon said.

The project is expected to create more than 500 jobs during construction and close to 100 direct jobs when in operation.

Legault said the province currently only has one biofuel facility, which means the province has to import it.

“But that will change with the project we’re announcing today,” Legault said. “We’re also together helping a good Quebec company and ensuring green technology innovation from Quebec will stay here.”

Work to prepare the site began in the summer of 2019 with the facility scheduled to open in 2023.