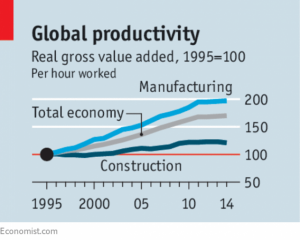 According to The Economist, ever since the financial crisis, the world has been plagued by weak productivity growth. One explanation is that in uncertain times firms are keener to take more people on to the payroll than to invest heavily in new equipment. The construction industry has been afflicted by such problems for decades. Since 1995 the global average value-added per hour has grown at around a quarter of the rate in manufacturing. According to McKinsey, a consultancy, no industry has done worse.

Things are especially dismal in rich countries. In France and Italy productivity per hour has fallen by about a sixth. Germany and Japan have seen almost no growth. America is even worse: there, productivity in construction has plunged by half since the late 1960s. This is no trifling matter. The building trade is worth $10trn each year, or 13 per cent of world output. If its productivity growth had matched that of manufacturing in the past 20 years, the world would be $1.6trn better off each year.

To read the full article from The Economists’ print edition, visit: https://www.economist.com/news/leaders/21726693-and-how-governments-can-catalyse-change-construction-industrys-productivity-problem