Still up by 84,000 positions over last year, October construction employment gains were wiped out in November, says Statistics Canada. 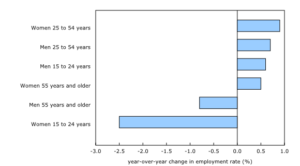 The number of people working in construction fell by 25,000 in November, reports Statistics Canada. The decline fully offset increases recorded in October, although the sector was ahead by 84,000 positions, or almost six per cent, on a year-over-year basis. Most of the November declines were seen in Alberta, which lost 13,000 positions, and British Columbia, with 9,200 fewer workers from a month earlier.

Overall, employment in Canada was little changed in November, and the unemployment rate declined marginally to 5.1 per cent. Employment among people in the core working ages of 25 to 54 rose by 38,000 for the month, the third consecutive monthly increase. Most of the increase was attributable to core-aged women, whose ranks grew by 25,000. The number of people employed on a full-time basis increased by 51,000 in November. Since November 2021, when full-time employment first surpassed its pre-COVID-19 pandemic level, full-time work has grown by 460,000 positions.

Total hours worked were little changed in November and were up 1.8 per cent compared with 12 months earlier, but influenza and other respiratory viruses impacted many parts of the country. Almost seven per cent of employees were absent due to illness or disability during the reference week used in the Statistics Canada tabulations.