Residential declines mask non-residential gains as overall figures fell less than one per cent from March. 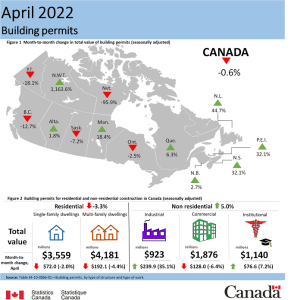 The total value of building permits in Canada was down 0.6 per cent in April, falling to $11.7 billion as gains in the non-residential sector were not enough to offset decreases in residential permits.

Residential permits in April were down 3.3 per cent from the previous month, driven mostly by lower intentions in Ontario and British Columbia. Seven provinces posted increases. Construction intentions in the single-family home component were down two per cent, with Alberta behind much of the decrease. Ontario’s drop of more than 20 per cent in the value of multi-family building permits paced the national figure to a 4.4 per cent dip. That province was returning to more normal levels following a strong February and March.

Large gains in Ontario’s industrial component (up 48.8 per cent) saw that segment surge more than 35 per cent, and helped pace the total value of non-residential permits to a five per cent gain to come in at $3.9 billion. Gains were attributed mainly to permits for several mining buildings in Greenstone, Ont.

Commercial permits were down 6.4 per cent, while intentions in the institutional sector rose 7.2 per cent. Ontario posted the largest gain, reflecting the expansion project of the Runnymede Healthcare Centre in Toronto and a new elementary school in Kingsville.