Building permits on the rise in most segments

After a bit of a slip in October, Statistics Canada reports that November’s figures were up almost seven per cent. 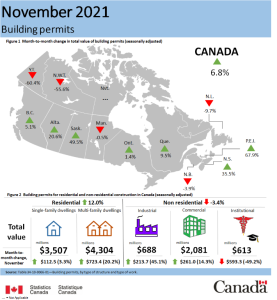 While the total value of building permits increased 6.8 per cent, to $11.2 billion, in November, a significant decline in institutional permits dragged the non-residential sector into a drop of 3.4 per cent from the previous month.

The value of institutional permits fell to its lowest level since April of 2020, dropping almost 50 per cent, to $613 million. Other segments of the non-residential sector fared much better, however.

Construction intentions in the commercial component rose by 14.3 per cent, led by Alberta where a $316 million permit was approved for the BMO convention centre expansion in Calgary.

Also on the rise were industrial permits, which were up more than 45 per cent in a reversal from the October figures. Much of the growth in this sector was from Ontario, where permits reached their highest level since August 2019.

The residential sector was full of highlights as permit values increased to $7.8 billion at the national level. The jump of 12 per cent helped the segment reach its highest level since setting a record in March 2021.

Multi-family permits came back nicely from their 8.5 per cent decline in October, rising more than 20 per cent. A $256 million permit for the Plaza One residential tower in Surrey, B.C. helped pace the November gains.

Permits for single family homes were up just over three per cent, and the sector saw a new high-water mark reached in Nova Scotia, where the value of single-family permits rose 35.9 per cent to $118 million.