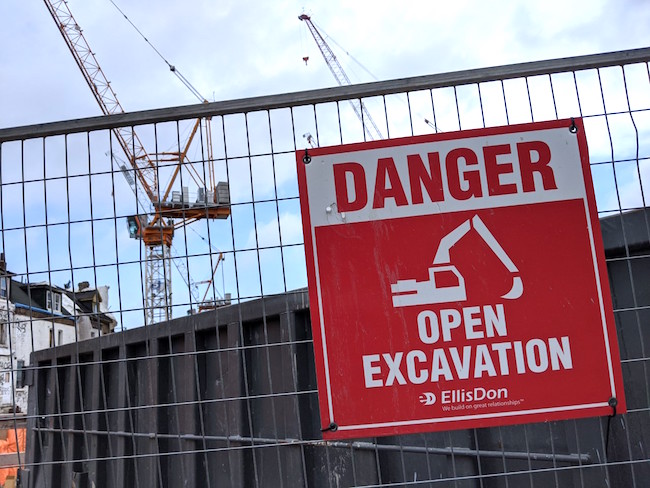 The latest government order allows a significant portion of residential work to continue, but halts most industrial, commercial, and institutional (ICI) construction

Until last week, Ontario’s construction industry seemed poised to ride out the coronavirus crisis by taking added precautions to guard against the spread of COVID-19 on job sites. The pace of work had slowed as contractors moved non-essential staff off-site and implemented added sanitation and social distancing measures, but projects continued to inch forward.

This changed April 3 when the province amended its essential services list governing what businesses can stay open during the coronavirus outbreak. In a press conference, Premier Doug Ford said the government would order work stopped on all but “critical” infrastructure projects, residential work “near” completion and a select few aspects of the industrial segment.

But upon closer inspection, the provincial marching orders exempt much of the residential sector and several other broad categories from closing down. They’ve also sowed confusion throughout the industry.

“The bottom line is this,” said Clive Thurston, president of the Ontario General Contractors Association (OGCA). “There’s too much grey and there isn’t any clear definition of what is essential and what isn’t essential.”

Thurston pointed to a commercial project currently under construction as one example. Ontario has exempted “projects and services associated with the healthcare sector, including new facilities, expansions, renovations and conversion of spaces that could be repurposed for health care space” from closure. Pointing to this broad definition, and the fact the new commercial building includes a doctor’s office and pharmacy, the project’s owner has ordered the contractor to continue.

“The owner’s saying… ‘You keep working or you’ll be in default of your contract,'” Thurston said.

“That [project], in my opinion, is not an essential service,” he added. “But we don’t know.” The longtime OGCA chief added that under typical contracts, general contractors that shut down without getting the nod from owners will be on the hook for liquidated damages.

Many projects in the industrial, commercial, and institutional sector (ICI) are in a similar position.

Gerard McCabe, the managing director for Canada at Turner & Townsend, also pointed to uncertainty among contractors and owners over what needs to close. The consultancy is currently working with a number of clients to appeal to the government for clarification and get approval for work to continue.

“In the meantime,” he said, “they’re preparing to close the sites down.”

In spite of the uncertainty, Thurston acknowledged most of his members in the ICI sector are trying to shut down. “But it’s difficult when up the street they see another contractor continuing to work on a similar project,” he added.

The OGCA has appealed to the government for clarification and is telling contractors to make owners provide government proof that a specific project falls under the “essential” umbrella.

The residential segment of the market is not entirely cut and dried either.

Richard Lyall, president of the Residential Construction Council of Ontario (RESCON), said most ongoing construction projects, including condos, are continuing, but the renovation market is essentially on hold. At the same time, no new residential building permits will be issued for the remainder of the crisis.

Lyall, as well as the Ontario government, pointed to residents currently waiting the completion of new homes as one of the key reasons to keep a portion of the industry open. “Does someone need a place to live? Yes. Does someone need a new kitchen right now? No. So I think the right call was made there,” he said.

With the market for condo and rental units continuing to boom in cities across the province, residential work represents by far the largest share of Ontario’s construction market. In January, the latest month for which data is available, Statistics Canada said investment in residential construction totalled nearly $4.4 billion. During the same time period, $1.9 billion was spent on non-residential, or ICI work.

Though the province’s changes to its coronavirus response last week will send the two segments of the market in separate directions, all parties share concerns for the industry’s future.

“You can’t just walk away from a construction site,” McCabe said. “So those sites need to be made safe and they’re in various stages of construction, so making them safe isn’t necessarily a straightforward thing.”

“And then the question is how long are you making them safe for?” he asked. “If you’re putting a site on hold for a couple of weeks, well that’s one thing, but if you’re closing it down for two or three months, that’s a different exercise.”

Determining who will pay for the site demobilization, security, remobilization and inevitable delay costs, will come later, but with potentially ruinous financial liabilities tied to hundreds if not thousands of projects across Ontario, contractors can’t simply walk away unilaterally.

McCabe, who has spent 30 odd years in the industry, said the situation is entirely without precedent. “I’ve never worked on a project that has been suspended due to force majeure,” he said, pointing to one of the legal avenues certain to be thoroughly explored in the months ahead.

Even without factoring in the legal fallout, Thurston fears a number of contractors will struggle to survive without clarity on the updated list of essential services and a fix for a regulation passed last month that allowed holdback to be withheld from builders.

“What happens when this is over?” he asked. “From the feds to the provinces to the municipalities, the one industry they’re counting on to bring the economy back after this is all over, is the construction industry. But if 20 to 30 per cent our firms, subtrades, suppliers and generals, don’t exist any more, how’s that going to work?”

Lyall sees the industry’s ability to bounce back as proportional to the length of time it’s shut down.

‘No time for half measures’: Ontario, Quebec order shutdown of non-essential businesses
Campaign to close the Ontario College of Trades continues to grow