‘No time for half measures’: Ontario, Quebec order shutdown of non-essential businesses

While both provinces vowed to shut down all but "essential" businesses, exemptions create far different situations for construction in Ontario and Quebec 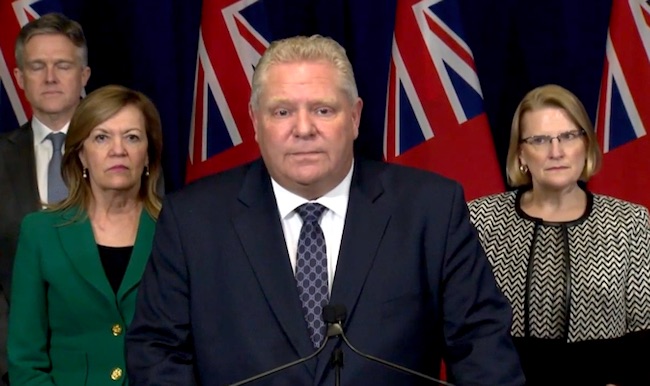 Non-essential businesses is Canada’s two most populous provinces have been ordered shut by midnight March 24.

In separate announcements Monday, Quebec Premier Francois Legault and Ontario Premier Doug Ford said all businesses not categorized as essential will need to shut their doors to help prevent the spread of COVID-19.

“This was a tough decision, but the right decision, as this is no time for half measures,” Ford said in a release. “But I have said from day one we will, and we must, take all steps necessary to slow the spread of COVID-19. The health and safety of every Ontarian must come first. The health of you, your children, your grandparents and friends depends on all of us doing our part.”

The novel coronavirus has spread to hundreds in each province over the past two weeks, despite an escalating number of actions taken to prevent it.

What qualifies as “essential” — particularly when it comes to construction — varies greatly by province, however.

Closures in Quebec will last until April 13 and include a wide swath of construction activities. In a list of exemptions released late March 23, the province said companies carrying out urgent repairs and those building or maintaining projects essential to public security will be allowed to remain open. Others will need to shut down until April 14.

Among the long list of projects to screech to a halt will be Montreal’s Réseau express métropolitain. In a statement March 23, the REM said work will stop at all project locations until mid-April to comply with the provincial order. All other building and infrastructure projects will also be compelled to pause for the following three weeks.

In Ontario, on the other hand, the restrictions allow most construction sites to remain operational. Ford set a 14-day window for the shutdown, but exempted construction and demolition across the industrial, commercial, institutional and residential sectors. The province’s list of exemptions also pointed specifically to road construction and maintenance, health care, provincial infrastructure and environmental remediation project as able to carry on.

The move to categorize most job sites as essential will likely divide the construction industry.

While many industry groups, including the Canadian Construction Association and several prominent Ontario construction councils have called for work to continue, others are pushing the government to press pause on the industry.

The Carpenters’ District Council of Ontario, for instance, urged the government for a temporary halt to all work in the province March 23.

“As Premier Ford announced today, the construction workers of this province should not be expected to work on job sites where the basic safety requirements for COVID-19 are not being met”, said Tony Iannuzzi, the executive secretary treasurer of the Carpenters’ Union. “Those minimum standards simply do not exist on most of our job sites now and we cannot get Ministry of Labour inspectors out to deal with problems our members are having.”

Among other issues, the Carpenters’ Union pointed to “many” job sites with no facilities with soap and hot water and no possibility of social distancing.

“A temporary closure of jobsites will allow employers who believe work on their projects can be carried on safely to get the job sites inspected by the Ministry of Labour and once that has been done our members and their families will know that work can proceed safely,” Iannuzzi said.

In Quebec last week, the FTQ-Construction and Conseil provincial (International) called for similar temporary measures to be taken.