A burnt bridge? Not for Aecon as contractor cleared to rejoin Gordie Howe project

The company withdrew from the winning construction consortium at the tail end of the RFP stage. With the China takeover now dead, it’s stepping back in 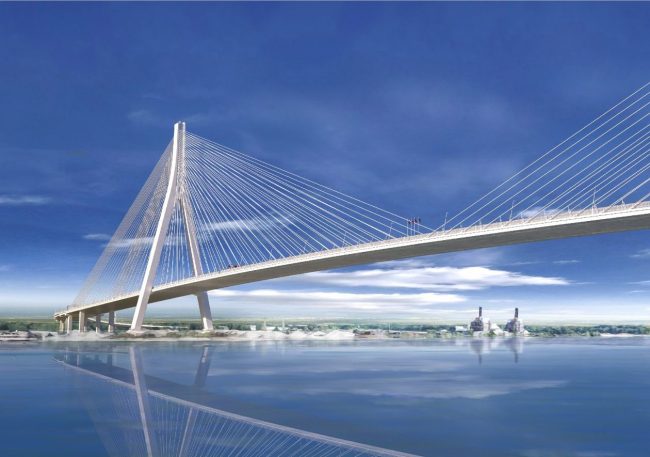 A rendering of the new 2.5-km cable-stayed bridge. PHOTO: WDBA

TORONTO—A month after the construction group it withdrew from was tapped to build the new Gordie Howe bridge, Aecon Group Inc. has been cleared to rejoin the consortium.

The Canadian contractor that was nearly swallowed by China’s CCCC International Holding Ltd. in a highly controversial acquisition, said Aug. 15 the crown corporation responsible for building the new Windsor-Detroit span has signed off on the reunion.

Aecon will reunite with ACS Infrastructure Canada Inc., Dragados Canada Inc. and Fluor Canada as part of the Bridging North America consortium. The group was picked as the preferred proponent to construct the 2.5-kilometre cable-stayed bridge last month.

“This is an important project for Canada and the United States,” said John Beck, Aecon’s president and CEO. “The Gordie Howe International Bridge project fits well into Aecon’s existing portfolio of projects. Given Aecon’s current resources, extensive involvement in the development of the proposal prior to its withdrawal and review of the final proposal, Aecon is pleased to be a part of the team to deliver this critical infrastructure project for the benefit of all stakeholders.”

The Toronto-based company had taken itself out of the running in May citing commercial reasons. Though Aecon would not elaborate on the decision, its pending takeover by the state-owned Chinese firm was widely speculated to be involved.

Back among its erstwhile partners, Aecon will work with the Windsor-Detroit Bridge Authority on finalizing the contract and construction plans. Financial close is expected by the end of September.

Construction, meanwhile, is already ramping up. It will begin in earnest once the public and private partners firm up the deal.