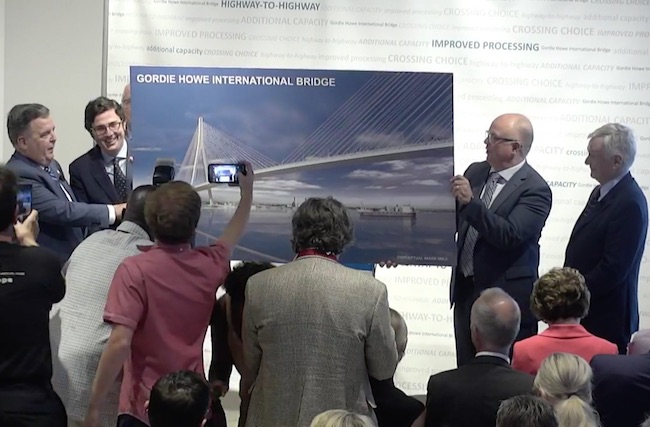 A first look at the final bridge design. The bridge will be the longest cable-stayed bridge in North America. PHOTO: WDBA/Facebook

WINDSOR, Ont.—The federal crown corporation responsible for erecting the new link between Windsor, Ont. and Detroit, Mich. has selected the construction team that will build the multibillion-dollar project.

“This is an exciting time for WDBA and for communities on both sides of the border,” said Dwight Duncan, chair of the WDBA board of directors. “The selection of Bridging North America as the preferred proponent is another step forward towards the start of construction.”

The construction and financing group is made up of ACS Infrastructure Canada Inc., Dragados Canada Inc. and Fluor Canada Ltd., among others. It will be responsible for designing, building, operating and maintaining the P3 project.

The new six-lane, cable-stayed bridge is expected to have a 125-year lifespan and provide an “alternative” to the ageing Ambassador Bridge, which is privately-owned.

The Gordie Howe project incorporates the span itself, ports of entry on both sides of the border and a connection to U.S. Interstate 75. The Herb Gray Parkway, the $1.4 billion connection on the Canadian side, opened in 2016.

The planning process stretches back to 2000, with numerous regulatory milestones coming in the early 2010s.

By January 2016, the WDBA had shortlisted three construction consortia to compete for the contract. The construction teams—Bridging North America, CanAm Gateway Partners and Legacy Link Partners—included some of the country’s largest contractors, including SNC-Lavlin, EllisDon and Aecon, the last of which eventually dropped out of the process. A full breakdown of the teams involved in the RFP stage is available here.

Financial close on the new bridge project is expected by the end of September. At that point, the WDBA will reveal the final estimated cost of the bridge and the construction schedule for what will be the largest infrastructure project along the Canada-U.S. border.