The decision to bow out of the procurement process comes just weeks before the federal government is set to pick a winning bidder for the $4.8 billion infrastructure project 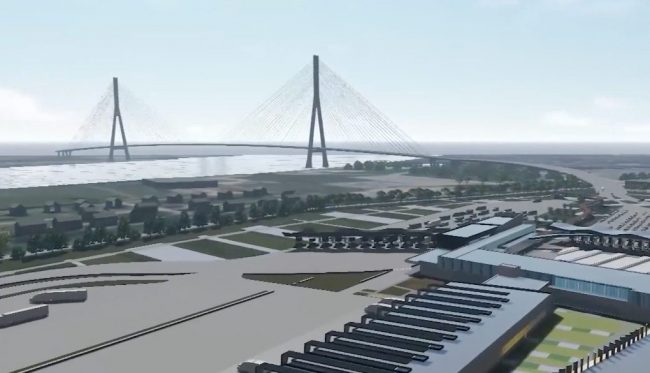 OTTAWA—The Canadian construction firm that could be swallowed up by a Chinese state-owned company says it will no longer be part of a private group bidding to build and operate a new bridge between Canada and the United States.

A spokeswoman for the Aecon construction firm wouldn’t elaborate on the decision to pull out of one of the consortia bidding on the Gordie Howe International Bridge project.

The company said in a curt email that it was a commercial decision.

The decision comes weeks before the government is to select the winning bid group that will build and operate the new $4.8 billion crossing between Windsor, Ont., and Detroit, Mich., with construction expected to start this fall.

Last October, the CCCC International Holding Ltd., of China made a $1.5-billion bid to acquire Aecon Group Inc., which has a long history of participation in Canadian construction and engineering projects such as the CN Tower, Vancouver’s SkyTrain, the St. Lawrence Seaway and the Halifax shipyard.

The Trudeau government has been warned by experts to proceed cautiously when weighing any investment bids by Chinese state firms and to be as transparent as possible in reviewing the proposed deal.

The federal government announced a full national security review of the Aecon deal in February.

At the time, a spokesman for Economic Development Minister Navdeep Bains said that, based on advice from security agencies, the government believed there is “a potential of injury to national security.”

The Liberals have come under intense domestic pressure to reject the takeover bid. A recent Ipsos poll found that nearly three-quarters of Canadians oppose the sale.

The Liberals have faced questions about how U.S. President Donald Trump would react to having Aecon involved in the bridge if the Liberals were to approve its takeover by a Chinese, state-run company.

Before Friday’s announcement, insiders said Aecon could be easily replaced because each bid group was required to have backup plans.