Tallest tower in Canada outside Toronto rises in Edmonton 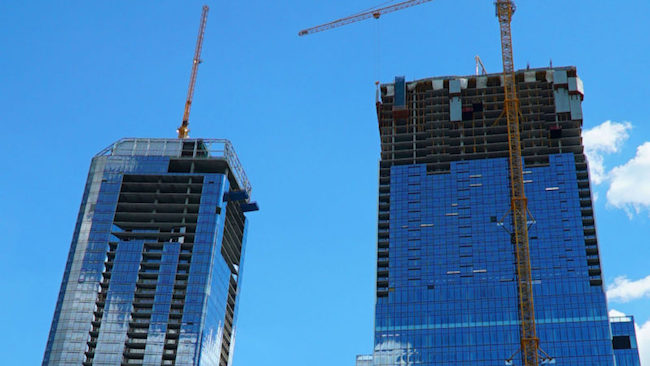 EDMONTON—A new Alberta skyscraper soon to become the tallest in Canada west of Toronto has climbed to 54 storeys, eclipsing all other towers in Edmonton and all but the tallest handful of buildings in Calgary.

The Stantec Tower reached 197 metres (646 feet) last week, while construction crews continue working to raise the new Edmonton building by about three metres each week. The tower will top out at 251 metres (823 feet), or 66 storeys.

Crews broke ground on the project in 2015 and expect to extend the tower to its final height by this fall.

A mixed-use complex, the building will include 29 storeys of office space—where Edmonton-based engineering firm Stantec Inc. plans to relocate its headquarters—as well as 37 storeys of residential space. The developers expect the tower to meet the LEED Gold certification.

While buildings taller than 200 metres (656 feet) are now scattered across Toronto, they are few and far between elsewhere in the country. The Stantec tower is expected to overtake anything in the Montreal, Calgary and Vancouver skylines this summer, making it the tallest Canadian building outside Toronto. Though it’s likely to be supplanted in the coming years, First Canada Place in Toronto’s Financial District—built in 1975—remains the country’s tallest building at 298 metres (978 feet).


Related Stories
Tallest Canadian tower outside Toronto topped off in Edmonton
Construction of Edmonton’s tallest tower to begin this fall
Construction crews near finish line on two-tower project that will be Toronto’s tallest outside downtown core
Construction on ‘The Stack,’ set to become Vancouver’s tallest office tower, to begin next year