The city of Winnipeg is due to decide this week whether to increase funding for the so-called “Freedom Road” to the First Nations Community of Shoal Lake 40. 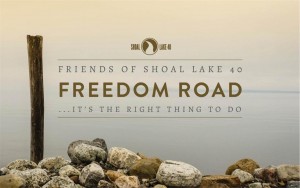 $30 million in government funding has been committed to build the Freedom Road that will connect the Shoal Lake No. 40 First Nation with the Manitoba Trans-Canada highway

The Shoal Lake community was isolated long ago by the construction of an intake for Winnipeg’s water supply, and has been on a boil water advisory for 18 years.

Plans for a water treatment plant to be built on the reserve, which straddles the border between Manitoba and Ontario, were dropped by the previous federal government in 2011.  So now the community wants to have an all-season road in order to be able to truck in clean water, and eventually to enable supplies to be brought in to construct a treatment plant.

The road will be a 24-kilometre stretch linking Shoal Lake to the Trans Canada Highway.  When plans to build it were announced it was called an “absolutely historic” occasion and a “path to reconciliation.”

However, the estimated cost of the road has risen considerably. From $30 million when it was conceived five years ago, the project is now expected to cost $46.5 million. The city of Winnipeg, the province of Manitoba and the federal government are sharing the cost.

Ernie Gilroy, chief executive officer of the Manitoba East Side Road Authority, which is overseeing the road project, told media that the costs had risen partly because it was decided that the road had to be built on rock fill rather than sand.  “The $30 million dollar estimate was based on a conceptual design, and you don’t know until you do the soil testing what’s under the soil.”

As well consultants’ costs have risen to $2.4 million, and two bridges that were required in Winnipeg have risen in cost from $1.9 million to $4.5 million.