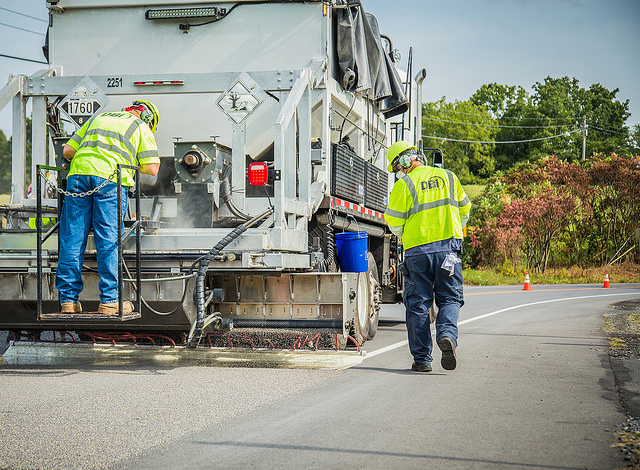 High-friction surface treatment can be applied on existing roads. PHOTO: Province of B.C.

NORTH VANCOUVER—The B.C. Ministry of Transportation is investing $3.9 million in a project to put vehicles on surer footing along more than a dozen high-risk stretches of pavement across the Lower Mainland and Vancouver Island.

The province said Sept. 5 that it will apply high-friction surface treatment (HFST) to 14 off-ramps and intersections, mostly in Metro Vancouver.

The project will line the sections of road with high-friction bauxite aggregate that’s designed to boost vehicle traction on both wet and dry pavement. With a higher coefficient of friction than traditional surfaces, HFST greatly reduces stopping times. It is typically applied over an existing road surface using advanced resin polymers and truck-mounted equipment.

Picked for their high rates of collisions, the locations in North Vancouver, Burnaby, Coquitlam, Maple Ridge, Surrey and Saanich will serve as technology pilots. The province said it may roll the road treatment method out on a wider scale if the project reduces accidents, in particular rear-end collisions.

HFST was pioneered in the U.K. in the 1960s, but has seen slow uptake in North America.

Construction crews will begin work on the project this week and are scheduled to complete each of the 14 jobs by the end of the month.