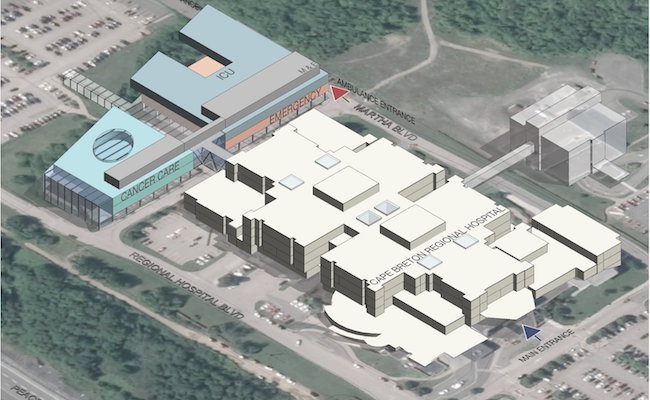 A rendering of the expanded hospital with two new buildings adjacent to the existing site. PHOTO: Nova Scotia Transportation and Infrastructure Renewal

The Nova Scotia government is looking for a contractor to head construction of a major hospital expansion project on the outskirts of Sydney, N.S.

This spring, the province announced a significant scale-up of the Cape Breton Regional Hospital, with plans to add a new emergency department, critical care department and cancer centre adjacent to the existing facility. It’s now taking the next step to advance the project and has issued a request for proposals.

Contractors interested in taking on the approximately 190,000 sq. ft. expansion, expected to be worth more than $100 million, have until Oct. 30 to submit their proposals.

The added space is expected to double the size of the Sydney hospital’s emergency and cancer departments, as well as triple the footprint of its critical care department. Current plans have the new buildings attached to the existing 300-bed hospital through pedestrian walkways.

The Cape Breton project isn’t the only major health care initiative the Nova Scotia government is working on. It coincides with the province’s larger effort to redevelop the Halifax infirmary site. The Department of Transportation and Infrastructure Renewal shortlisted two build teams that will face off for that contract this August.