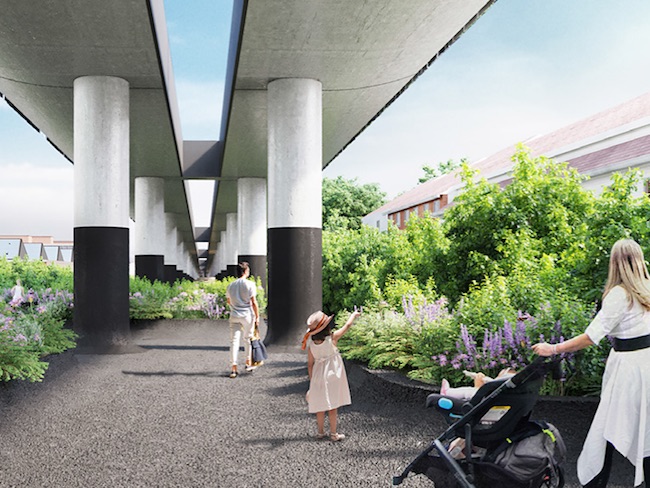 A rendering of the elevated guideway with usable space underneath. PHOTO: Infrastructure Ontario

TORONTO—A construction team led by Graham Group Ltd. has been tapped as the preferred proponent for the Davenport Diamond Rail Grade Separation project, a major rail realignment job on the west end of Toronto.

Provincial government agencies Infrastructure Ontario and Metrolinx said June 17 that the Graham Commuter Rail Solutions consortium will take on the design, build and finance project — though the official financial close is not expected until later this summer.

Part of GO Transit’s expansion project, the grade separation work will eliminate one of the last high-traffic rail crossings in city by elevating tracks used by passenger trains on the Barrie GO Line over the east-west CP Rail corridor. Currently, the at-grade rail crossing functions similarly to a four-way traffic intersection, resulting in slowdowns.

The residential and mixed-use make up of the surrounding area — roughly Landsdowne Avenue and Dupont Street on the city’s west end — will not make the job easy. According to engineering firm Hatch, which participated in the environmental assessment for the project, the relatively dense urban setting of the crossing presents significant design challenges.

To build the grade separation, crews will need to install a 575-metre elevated guideway that’s wide enough for two tracks with approximately 400-metre berms on each end. Other aspects of the job include replacing a nearby rail bridge and modifying an existing at-grade street crossing so the road runs under the GO Rail line. During construction, a temporary rail diversion track will also need to be installed to keep rail traffic moving.

An underground tunnel was originally investigated in place of the guideway and overpass, but designers opted for the latter option as fewer residents would be impacted.

Final construction costs will be available at financial close this summer.

Construction is expected to begin shortly after the government agencies and build team finalize the contract.

The Graham Commuter Rail Solutions team is made up of: