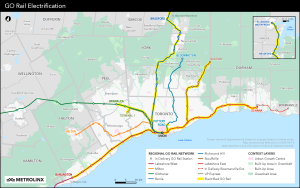 The Ontario government has awarded a contract to modernize and expand the GO Transit rail network, bringing frequent, two-way, all-day service to the Greater Golden Horseshoe region of the province. The agreement, executed by Metrolinx and Infrastructure Ontario (IO), will see ONxpress Transportation Partners (ONxpress) enter the Development Phase of the On-Corridor Works project. This is the largest project in Metrolinx’s GO Rail Expansion program.

The multi-billion-dollar capital project will transform the commuter rail network with electrification, more frequent service, shorter journey times and a more modernized system for the Greater Toronto and Hamilton regions.

It will involve the addition of more than 200 kilometres of new track and the electrification of over 600 kilometres of track. The plan also includes the introduction of an electric train fleet that may reach speeds of 140 kilometres per hour between stations.

ONxpress is comprised of leading Canadian and international companies with the expertise to deliver a complex regional rail project. Key roles within the enterprise are shared as follows:

The Greater Toronto and Hamilton regions are experiencing incredible growth, and the province anticipates that an estimated 9 million people will call this part of Ontario home by 2041. The GO rail network currently includes 400 kilometres of track and has an annual ridership of 57 million with 78,000 train trips. When complete, the GO Expansion Program is projected to deliver over 200 additional kilometres of track and be able to serve an annual ridership of over 200 million by 2055.

“The GO Expansion program is the backbone of a historic investment in transit, connecting new subways, new light rail lines and local transit into a tightly integrated regional network,” stated Phil Verster, president and CEO of Metrolinx. “This and more will be delivered by the ONxpress team, who proposed service levels that far surpass our GO Expansion full business case and will transform GO Transit into a world class transit system to move the region like never before.”

“Building Ontario through critical infrastructure projects like GO rail expansion, will unlock the potential of the economic engine of our province: the Greater Golden Horseshoe,” said Caroline Mulroney, Ontario’s Minister of Transportation.

Under the agreement, ONxpress will be responsible for designing, building, operating and maintaining all GO rail infrastructure and trains for 25 years. This includes all works that facilitate train service, such as track, civil infrastructure, signalling, electrification infrastructure and electric vehicles, as well as the operations and maintenance of the GO rail network.

The goal is to deliver 15-minute or better, all-day service on the core GO Transit lines of Lakeshore West, Kitchener, Barrie, Stouffville, and Lakeshore East to transform the way the region’s citizens will move, and to make it easier for customers to get to where they need to go.

“Transforming the GO rail network and delivering two-way, all-day service will be a game-changer for the people of the Greater Golden Horseshoe,” said Stan Cho, Associate Minister of Transportation. “With quicker and more convenient ways to get from Point A to Point B throughout the region, people will thrive with easier access to home, work and recreation.”

The On-Corridor Works project is being delivered as a Design-Build-Operate-Maintain (DBOM) model with a collaborative approach between the project owner and the contracting partner. Due to the magnitude of the project, a two-year Development Phase has been planned before it will progress to the design and construction of any early works for the project.

The contract cost and schedule will be shared publicly once this phase is completed in 2024. Construction is expected to start in 2023 with incremental opportunities to add service starting in 2025 or 2026.

The On-Corridor Works assets will remain publicly owned by the Province of Ontario and managed by Metrolinx as part of its GO rail regional program.